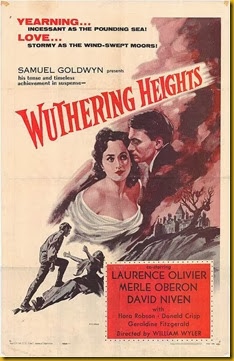 As novel to screen adaptions go, director William Wyler’s Wuthering Heights (1939) is far from a faithful retelling of Emily Bronte’s gothic tale of love, jealousy, and vengeance.  Never mind that the entire second half of the novel is omitted by screenwriters Charles MacArthur and Ben Hecht’s Oscar nominated screenplay, it’s the last twenty minutes of the film that will forever cause Bronte to turn in her grave. Yet, I’m not going to discuss how insanely wrong MGM presented the true meaning of Wuthering Heights to countless generations of non-readers in this review. Instead, I want to talk about two things: Greg Toland’s gorgeous black and white cinematography and the romanticization of pathological behavior. 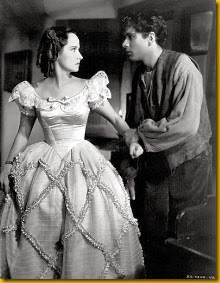 Wuthering Heights was nominated for eight Academy Awards: Best Picture, Best Actor (Laurence Olivier), Best Supporting Actress (Geraldine Page), Best Art Direction (James Basevi), Best Director (Wyler), Best Original Score (Alfred Newman), Best Screenplay (MacArthur and Hecht), and Best Black and White Cinematography (Toland).  Of these eight nominations, only Toland went home with the gold statue, and only because Gone with the Wind (1939) was in color and thus won Best Color Cinematography.  Perhaps things would have turned out better that award season for Sam Goldwyn had he opted for Vivien Leigh to play Cathy instead of Merle Oberon. I expect his unrelenting statement that Wuthering Heights, a commercial failure until its reissue, was his favorite of all of his productions instead of such superior films as The Best Years of Our Lives (1945) and The Little Foxes (1941) was a direct result of getting trounced by Leigh and Gone with the Wind in 1939.

Toland described Wuthering Heights as “a soft, diffused picture, a fantasy”.  Through Toland’s lighting and camerawork, Wyler was able to depict four separate thematic moods.  Every last scene in the Earnshaw house (Wuthering Heights) is presented as somber, dark and foreboding.  From the opening scene where Heathcliff (Olivier), Isabella (Fitzgerald), and Ellen (Flora Robson) are sitting around the hearth when Lockwood (Miles Mander) interrupts their constant unhappiness, this house is lensed as a house of doom.  The moors that Cathy (Oberon) and Heathcliff escape to in times of both happiness and despair are depicted in two ways.  While Toland always seemed to capture 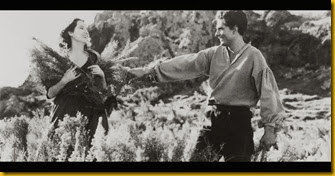 the windy look of the rugged moors, he also appeared to present them based on the mood of the story.  When the couple experiences happiness the lighting is warm and inviting, but when things are going bad, say when Cathy chases after Heathcliff in a torrential downpour, the sky is dark and menacing.  And, then there is the Linton house, which always seems to be presented as extremely bright and cheerful, but can also be filmed in a way that its brightness also seems overbearing—more on that in a minute.

Known for his penchant for filming scenes in front of mirrors, Toland captured two of the most memorable scenes in Wuthering Heights by employing mirrors. It is not a coincidence that both scenes involved Cathy, since in Bronte’s novel mirrors had the habit of mocking and tormenting Cathy.  One scene occurs after Cathy 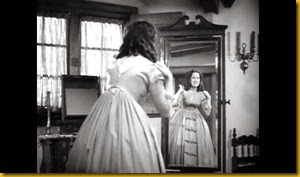 and Heathcliff have a big fight, in which she treats him like a servant after returning from her first convalescence at the Linton house. Upon returning to her room she gazes at herself, dressed in one of Isabella’s fine dresses, in a full-length mirror. As she grows enraged with herself over how she treated Heathcliff she proceeds to violently rip the dress from her body. The other memorable mirror scene finds Cathy gazing into a mirrored dressing table as she prepares for Edgar Linton’s visit (David Niven). When Heathcliff barges into her room to dissuade her from the meeting, her mood completely changes.  For Cathy, both in the film and in the novel, mirrors represent her two personalities/faces—one is wild, carefree, and in love with the world in which Heathcliff resides, the other face is wanton for fine, pretty, respectable things and maliciously hateful toward Heathcliff’s presence, as it endangers her ability to first obtain and then keep “respectable” things.

And this brings me to Wyler’s romanticization of pathological behavior in Wuthering Heights.  I’ve heard people say that this is a film about undying love and all of the idiotic things that go along with such a statement. Quite frankly, it is not, even if that is what Goldwyn wanted with his insane de 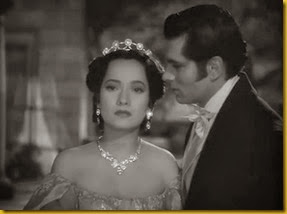 mand that the ending, which Wyler refused to shoot, find the ghosts of Cathy and Heathcliff wandering the moors eternally together. In today’s world, Cathy and Heathcliff’s story would have been one you would see on the nightly news: obsession turns to murder suicide.  Let’s forget that Heathcliff’s true character is bastardized by this movie—he was a horrible, though troubled, man in the novel.  It is Cathy’s behavior that is pathological—she probably would have been diagnosed with some sort of personality disorder if such a diagnosis existed at the time.  She loves Heathcliff but despises him at the same time. She doesn’t want to settle so she marries someone she doesn’t love to achieve the security and respectability that she so desires. Yet, when Heathcliff elopes with Isabella she has a nervous breakdown which causes her health to deteriorate, which causes her premature death. Ick! 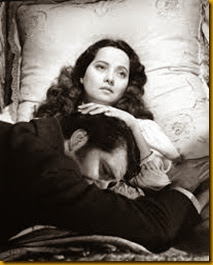 Only the deathbed scene, at least for me, somehow salvages the true nature of this unhealthy relationship.  Perhaps some found it romantic, but for me it was filmed in such a way that it truly represented their relationship.  Usually death scenes are shot in an aura of softness and employ somber lighting, but Cathy’s room of death is filled with bright lighting and so much white that it is sharp to the eye.  Forget Heathcliff’s whimpering and declarations of undying love, this brightly lit room is spotlighting how selfishness, vanity, vengeance, and revenge have no place in the world of love.  Cry Heathcliff for the world of happiness you never had. Feel your pitiful life drain from your listless sick body Cathy as you document the true state of your relationship by saying, “If I could only hold you till we were both dead.” In the end, your depravity not only destroyed both of you but those who made the mistake of loving you.  I expect many will not agree with my interpretation of the ending, but I take solace in the knowledge that Bronte probably would look at it the same as I do.