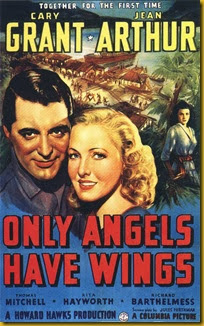 While the great screwball comedy Bringing Up Baby (1938) is my all-time favorite Howard Hawks’ film, I must admit that the director made a number of enjoyable dramatic films, too.  His versatility was what made him one of the best directors of his time.  Yes, his movies often ran over budget and very rarely wrapped on time, but he usually put out quality products.  Such was the case with Only Angels Have Wings (1939), which was hugely successful for Columbia Pictures and was the third highest grossing production of 1939—no small feat in one of the greatest filmmaking years ever.  While it didn’t swallow up a ton of Academy Award nominations like Goodbye Mr. Chips (1939), Gone with the Wind (1939), Wuthering Heights (1939), Mr. Smith Goes to Washington (1939), Stagecoach (1939), Love Affair (1939), and The Wizard of Oz (1939), it was comprised of a gifted cast and some phenomenal aerial cinematography. 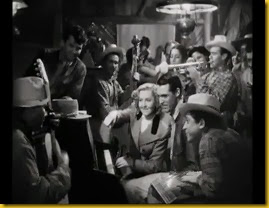 Of course any film that had Cary Grant as its male lead was assured of a charismatic hero, thief, cad, or jester.  Grant had screen presence and he always seemed at ease with whatever role he played. Perhaps this is why someone who did so many memorable films was so often overlooked by the Academy—he only earned three nods in his storied career.  His co-star in Only Angels Have Wings had the same problem.

I wholeheartedly believe the reason Grant’s and Arthur’s acting 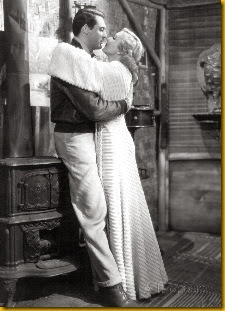 abilities were often so overlooked—or you might say taken for granted—is because they made it look so easy. Also, they both had the ability to interweave comedy into overall dramatic films, as they did in Only Angels Have Wings, which was a heavy film.  Grant’s Geoff Carter is, to quote Dutchy (Sig Ruman), a hard man who pushes the limits of his pilots to ensure the success of his struggling Barranca Airways.  Arthur’s Bonnie Lee is a sharp-tongued and hot-tempered woman who finds herself unexpectedly involved in a masculine, adrenaline fuelled world she doesn’t understand.  Anytime someone takes to the air it might be the last thing that they do—and if it is, then the others must carry on as if nothing has happened.  With this ever-present fact hanging over their heads, Geoff and Bonnie have to maneuver through a burgeoning love affair which is jeopardized by his love of flying and her fear of his death. It would have been easy for the movie to turn into a heavy-handed melodrama, but the comedic moments between Geoff and Bonnie adds another layer to the film.  Also, who could do sly sexual banter better than Grant and Arthur—perhaps Grant and Irene Dunne, but you get my point.

Only Angels Have Wings also benefits from good performances by Richard Barthelmess, Rita Hayworth, and Thomas Mitchell.  Barthelmess’s turn as an outcast pilot who takes the most dangerous jobs was probably his best since The Dawn Patrol (1930). Hayworth, who plays Bathelmess’s wife, Judy, turns in a performance that showed she had the chops to finally stop being cast as a lower supporting player.  Yet, it is Thomas Mitchell as 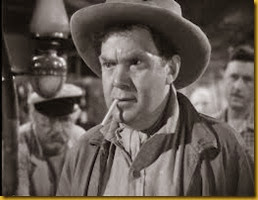 Kid, the self-sacrificing almost blind pilot, that is the standout.  Not gifted with the good looks of Grant, Mitchell was a fine actor who found himself in supporting roles. Oh, but what a great supporting actor he was. While he won an Academy Award for Best Supporting Actor in 1939 for Stagecoach, he could just have easily been nominated for his performance in Only Angels Have Wings. While Grant and Arthur were the spine of the movie, Mitchell was the heart of it.

The two Oscar nominations that Only Angels Have Wings did receive were primarily related to its aerial elements.  Joseph Walker earned a Best Black and White Cinematography nod, and Roy Davidson and Edwin C. Hawn were nominated for Best Special Effects.  The two crash scenes (and one near-miss) in Only Angels Have Wings are expertly filmed and recorded.  I expect it was 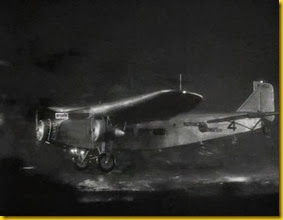 pretty dangerous to crash a burning plane at such a high speed, and it is quite jarring to watch—especially for anyone who doesn’t like to fly.

Hawks had a fascination with airplanes and made a number of other memorable films about aviation: The Air Circus (1928), The Dawn Patrol (1930), Ceiling Zero (1936), and Air Force (1943). Hawks’ love of aviation began during WWI when he learned to fly in the U.S. Army Air Service and continued throughout his life.  It was this love that helped him showcase both the beauty and danger of flight.  No other director defined the genre better, and his depiction of the hero-pilot has been mimicked in countless films up to present day cinema.  It is shocking to me that someone hasn’t put a Blu-ray collection together of his aviation films.