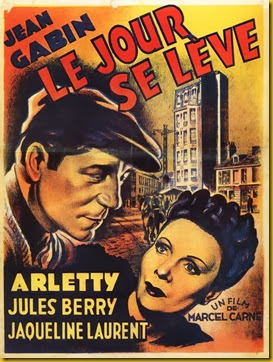 There are two important, though strange, reasons why director Marcel Carné’s Le jour se lève (Daybreak, 1939) is still considered an important element of French filmmaking. First, and probably most importantly, it is considered by many critics to be the greatest cinematic example of French poetic realism—I do not concur and will speak to that momentarily.  Second, it was suppressed not once but twice for two very extreme reasons.  With a resume like this, is it any wonder why Le jour se lève retains a place in some critics’ film Pantheon? Alas, for me, at least, it does not shine quite so brightly.

Jean Gabin was the greatest French actor of his generation. He worked with the best French directors: Jean Renoir, Julien Duvivier, Jacques Becker, and René Clément, on some of t 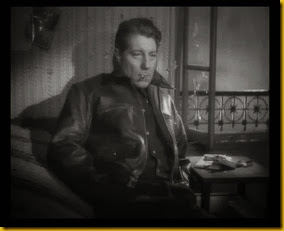 he most important films to come out of France in the 1930s through the 1950s.  Still, he was a difficult man to work with and he had a notorious eye for the ladies—specifically one named Marlene Dietrich.  As such, when he did try to make it in Hollywood during the days of Vichy France, things went very poorly for him and he never became an international star like his fellow countrymen Maurice Chevalier or Charles Boyer. Still, he embodied the handsome, hard-working man with a strong conscience that appealed to French audiences—hence, his portrayal of François in Le jour se lève.

François is a simple foundry worker who falls in love with an innocent flower shop girl, Françoise (Jacqueline Laurent).  Sounds simple enough, doesn’t it?  Well, from the very first minute of the movie you know it’s not, because a man gets shot and proceeds to have one of the most over-the-top death scenes ever—falling down not one flight of steps, but several—and then is only pronounced dead by a blind man (Georges Douking) poking him with a stick. The police come and our hero and murderer, François, barricades himself in his room for a day so he can remember everything that led up to the moment that he 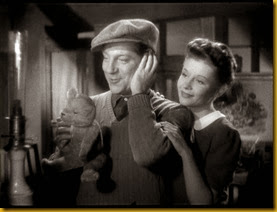 pulled the trigger. Ah, but this isn’t your ordinary Hollywood flashback.  No, no one says, “It all began…” to us or an interrogating detective—just a simple dissolve and we are in the foundry with François when he first meets Françoise.  This was such a revolutionary film technique that it  was deemed too confusing for the audience and a title card had to be added at the beginning of the film to explain what was going on.

The story itself is intriguing and allegorical at the same time.  Of course, François represents the recently defeated Popular Front and the police are viewed as pawns of Fascism, this is where the poetic realism comes into play, but at heart the film is nihilistic and depressing.  Think about it, François falls in love with an idealized woman (Laurent) who is distracted by womanizing dog trainer, Valentin (Jules Berry), who promises to take her to beautiful, European hotspots.  And while she refuses to engage in a sexual relationship with the hard-working François, she most assuredly begins such a relationship with a man who trains animals to do what he 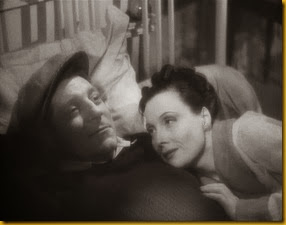 wants. Oh, and then there’s Clara (Arletty)—the woman smart enough to leave Valentin and to see what a good man François is.  Perhaps I’m biased here, but in a way, François got what he deserved in the end because Clara was obviously the best woman for him, but instead he throws her over for the idiotic, and dare I say it, boring, François.

Okay, so yes, Le jour se lève is full of poetic realism.  François is a working class man with a fatalistic world view who destroys his one shot at happiness by killing someone (although, I would argue that he was on the wrong path in regard to which woman he should choose).  From start to finish there is a cloud of bitterness that hangs over the story that is irritatingly devastating.  Still, I cannot concur with those who believe this is the masterpiece of the genre—as Jean Renoir’s Grand Illusion (1937) is a far superior film, and while it does not have the quintessential tragic ending as does Le jour se lève, stylistically it is a better representation of poetic realism.

Le jour se lève’s overt socialistic and fatalistic themes did not play well in Vichy France and it was banned in 1940.  Not willing to account for their own cowardice and connivance in the wake of the German invasion, Vichy leaders called the film demoralizing, and it was not shown in France again until after the war.  As if the Nazis 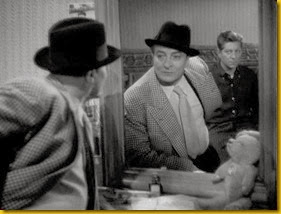 and collaborators weren’t enough, RKO decided it wanted to make a remake of the film in 1947 and attempted to buy up all copies of the movie and destroy them.  Now, I like Henry Fonda, but RKO”s remake, The Long Night (1947), was a bastardized, horrible version of Le jour se lève. Thankfully, some people in France kept a few copies of the film out of the hands of RKO and it still lives on today.

Overall, the story of Le jour se lève is intriguing. Still, while I enjoy both Gabin’s and Arletty’s performances (hers more so), I found Laurent and Berry unpleasant to watch.  She due to her vacuous personality and he due to his unending need to overact.  And, finally, when you begin a film with the ending there needs to be something in the main section of the movie that allows you to understand why someone would commit murder—and here, there is nothing. Instead, at the end you ask yourself, “Really?”—even if it was poetic realism.