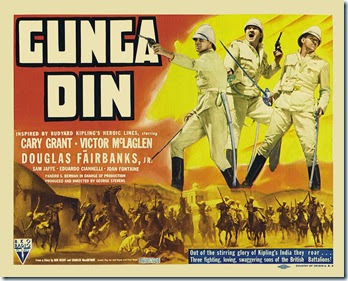 Director George Stevens’ Gunga Din (1939) is a product of its time.  Loosely based on the Rudyard Kipling poem of the same name, this 75-year old film celebrates British colonialism in a strangely uneven way.  At times, it is a buddy comedy and at other times it is a serious action/war picture—as such, it is difficult to pigeonhole it into a particular genre.  The film itself is not bad, but its plot has not aged well and can be off-putting to some.

Set in the Hindu Kush region of India, circa 1880, the British are dealing with a local murder cult known as the Thuggee who are also freedom fighters.  When the Thuggee murder an entire outpost and disable the telegraph line, three sergeants are asked to lead a small group of soldiers to investigate 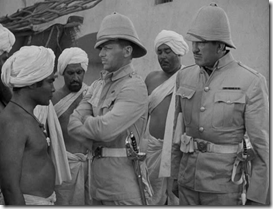 and repair the telegraph.  Sergeant Cutter (Cary Grant) is a cockney soldier always on the lookout for a get rich quick scheme, usually in the form of buried treasure. Sergeant MacChesney (Victor McLaglen) is the leader of the group, who has a fondness for elephants. And, Sergeant Ballantine (Douglas Fairbanks, Jr.) is counting the days until his discharge so he can get married (to Joan Fontaine) and go into the tea business. It’s obvious the three men are great friends, but the prospect of Sergeant Ballantine leaving the group to get married causes both friction and joviality in the story.

There are many reasons why Gunga Din has not aged well. First, an American film celebrating British colonialism in a post-colonial world is very rarely viewed fondly. Second, most, if not all, of the Indians are played by white men wearing body paint.  You add this irritating detail to the fact that Gunga Din (Sam Jaffe) sacrifices himself for the British 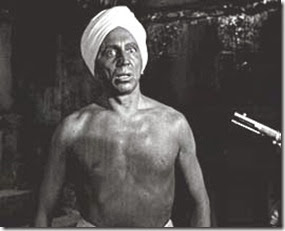 army at the cost of the lives of his countrymen and you can’t help but cringe.  Furthermore, after allowing the Guru (Eduardo Ciannelli) to give a rather impassioned speech about how old and accomplished India is compared to that of Britain, screenwriters Ben Hecht, Charles MacArthur, Joel Sayre, and Fred Guiol then portray him as a complete madman.  Additionally, when one considers that the Indian people were, for the most part peacefully, trying to extricate themselves of British rule in 1939, led by Gandhi, a picture glorying the bravery and might of the British army seems a tad insensitive.

The overall atmosphere of Gunga Din doesn’t abate the movie’s overall insensitivity, either. Had the film been a more focused, dramatic look at the conflict between the British and the Thuggee, it may have been more palatable.  Instead, Stevens jumps back and forth between seriousness and inanity.  While it was great to hear Grant’s natural cockney accent, his screwball 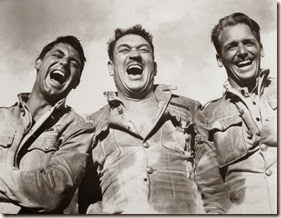 antics throughout the film are grating to say the least.  And, while one can’t complain about anything that celebrates the bonds of soldiers, there is a fine line between showcasing and ridiculing such bonds. Gunga Din does not traverse this line well, and, as such, there is an uneven feel to the overall production.  Had the film been more focused, and the runtime cut by about 15 to 20 minutes, I think I would have enjoyed it, even with its insensitive message, a lot more than I did.

Gunga Din did earn one Academy Award nomination for Best Black and White Cinematography (Joseph H. August), which was probably the best thing about it.  Shooting massive battle scenes in the middle of the Sierra Nevada and Alabama Hills and then trying to pass them off as having taken place in the Khyber Pass was no small feat, but August and Stevens pulled it off.  Still, this is not enough to make this a must-see film, either.