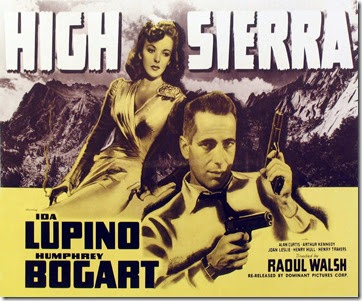 For those unfamiliar with Humphrey Bogart’s first twelve years in the world of cinema, where he played countless supporting and ancillary roles, it’s probably surprising to read the above movie poster and see that Ida Lupino was awarded top-billing in High Sierra (1941).  It might be even more perplexing to learn that director Raoul Walsh didn’t want Bogart to have the lead role but wanted George Raft to play Roy Earle. The adapted screenplay, penned by Bogart’s friend John Huston, from the W.R. Burnett novel of the same name, was just the vehicle Bogart was looking for to step out as a legitimate leading man. And, so he first went about persuading Raft to turn down the part and then convincing Walsh to give him a chance.  The rest is Hollywood history, as the film was a success and both Bogart and his buddy, Huston, would go on later that year to make the first of their six films together, the iconic The Maltese Falcon (1941)—coincidentally, in yet another role that Raft passed on. 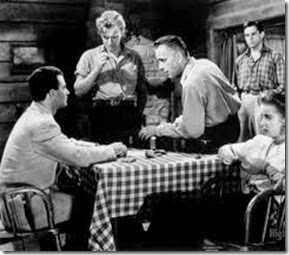 Roy Earle (Bogart) is an old timer (although Bogart was just past 40 when the film was made) who finds himself paroled by friends with reach who want him to lead a caper at a resort town along Mt. Whitney in the Sierra Nevada Mountains.  A nature lover at heart, Roy just wants to pull one more big-time score and settle down on a farm. The problem is he’s a dying breed—most of the guys he came up with are either dead or in Alcatraz—and he has to work with young punks, or in his words, “Jitterbugs”. And so he winds up saddled with Babe (Alan Curtis) and Red (Arthur Kennedy), two idiots who are constantly fighting over dancehall girl, Marie (Lupino), and a weak-willed dandy of a man as his inside man (Cornel Wilde).  With a crew like this, what could go wrong?

I expect the main reason that High Sierra made it into the 1001 Book is because it was Bogart’s breakthrough role, but the film also created a new character type, the existential gangster. The character of Roy is rather developed for your usual hard-boiled gangster type.  As mentioned above, he’s an admirer of nature, but he also has a soft spot for the disadvantaged, as evidenced by his friendship with an Ohio family who he meets on the road to California.  He not on 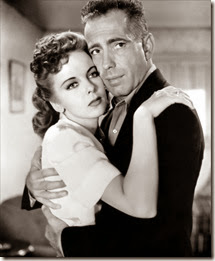 ly pays to have their car fixed, but he also pays to have the granddaughter’s, Velma (Joan Leslie), clubfoot fixed.  Granted, he has eyes for Velma, but he’s attracted to her perceived decency more than anything.  This decency, of course, is illusory and he eventually realizes that sometimes cheap things (Lupino) are more reliable and valuable than fresh new things.  Of course, none of this matters in the end, because Roy isn’t bound for a happy ending anyway (not with the Hays Code in effect), which leads to his last stand in the crags of Mount Whitney.

For me, High Sierra suffers from being too top heavy.  What I mean by this is that other than Lupino and Bogart, the rest of the cast is forgettable, sans one small appearance by Donald McBride as Big Mac. This problem would have been avoided had Huston been the director and not the screenwriter, as he knew how to put a strong supporting cast together, something, in my opinion, that Walsh was never very good at.  It doesn’t help that probably the most important supporting role, Velma, was either incorrectly played by Leslie or misdirected by Walsh 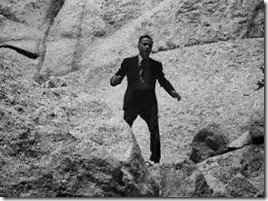 .  Velma’s transformation from an innocent “cripple” to a care-free party girl is probably the most unbelievable thing about High Sierra, and that’s including the bit where Pard the dog could navigate the rocky hillside of the mountain to find Roy by only hearing his voice once.

The other thing that I don’t like about High Sierra is the ending—specifically the last ten minutes of it. The idea that any seasoned gangster would not fill his gas tank up and have enough money in his pocket for another tank before setting out to collect $30,000 is just ridiculous.  Then, you add the fact that he would lead a chase through the mountains, for what seems like forever, round and round we go, and then set up behind rocks for his last showdown only to be lured out by a barking dog is beyond ridiculous.  As such, the film ends on a sour note and leaves a bad taste in my mouth.