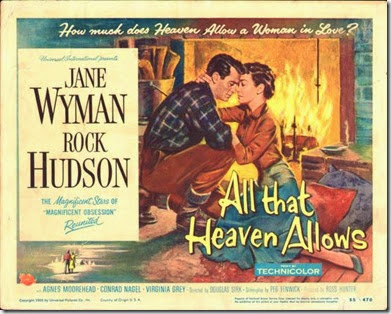 No one in classic Hollywood did melodrama better than director Douglas Sirk.  With films like All I Desire (1953), Magnificent Obsession (1954), There’s Always Tomorrow (1956), Written on the Wind (1956), Imitation of Life (1959), and today’s entry, All That Heaven Allows (1955), Sirk made movies that focused on domestic concerns, almost always centered around the emotional needs and desires of women. Over and over again certain themes would appear in his pictures: female alienation from social norms; motherly love tested by the selfishness of their children; and, criticism of conformity—although this particular theme was not always recognized by critics, at least not until the veil was lifted about how un-ideal the 1950s actually were for many American women.  Yes, the plots of many of his films played like a soap opera, but no soap opera was ever so well acted or sumptuously lensed. 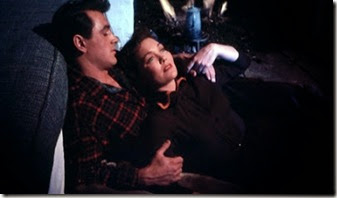 Such is the case with All That Heaven Allows, a melodrama which reteamed Jane Wyman and Rock Hudson following their hugely successful pairing in Magnificent Obsession. While Wyman was a star and an acclaimed actress (she had three Best Actress nominations and one Oscar statute) when she first worked with Sirk on Magnificent Obsession (for which she earned her fourth Best Actress nomination), Hudson was pretty much a second, third, or fourth banana in Hollywood and was regarded more for his looks than for his acting abilities.  Sirk must have seen something in Hudson that others did not, because between 1952-1958 he and Hudson made nine films together at Universal.  All That Heaven Allows was their fifth collaboration, and their second pairing with Wyman.  Clearly, Wyman was the star of the show, but by this point Sirk new how to get the most out of Hudson that he could.

Based on Edna and Harry Lee’s 1952 story of the same name, All That Heaven Allows is billed as a May/December romance between a well-to-do widow and a working-class gardener/arborist.  Mrs. Cary Scott (Wyman) is a lonely widow who feels isolated by the world she and her deceased hus 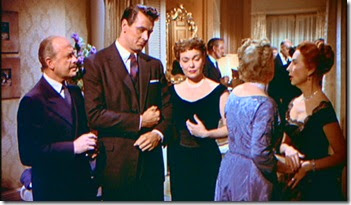 band used to occupy. Her two grown children, Kay (Gloria Talbott) and Ned (William Reynolds), are preoccupied with their lives at their Ivy League schools and assume that their mother will eventually marry a mature, and very passionless, man from their social set—or purchase a television set to spend her evenings with.  However, she strikes up a friendship with Ron Kirby (Hudson), the man who prunes her trees, and against her better judgment begins an affair with the handsome man who is both younger than herself and who is also of lower social standing.  She is attracted to more than his good looks, though.  She admires his individuality and his simplicity, and through interactions with he and his friends Cary finds a world where people care about other people—not about how much money they have or their social standing.  Yet, when Ron asks her to marry him, at first she says that it will never work because of their differences. Ah, but love is strong and she decides to take a chance—and that’s when the nastiness begins.  Her snobby friends (sans poor Agnes Moorehead’s Sara) find the relationship scandalous and her children think it’s humiliating—mostly to them.  Unable to “thine own self be true”, Cary breaks off the engagement to appease her beyond-selfish children and finds herself alone and miserable.  Finding herself at a personal crossroads (in front of a television nonetheless), Cary has to make up her mind about whether she’s going to live her life for others or for herself. 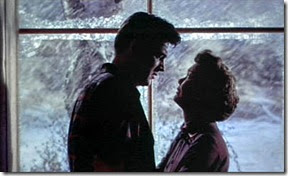 Personally, I don’t think this is a film about a May/December romance. Wyman was 38 years old and Hudson was 30 when they made All That Heaven Allows. While I know Cary is supposed to be in her early to mid forties and have two college-age children, she doesn’t look all that much older than Ron.  Perhaps that was a focal point in the Lees’ story (I’m pretty sure she’s supposed to be fifteen years older than Ron), but it really isn’t in the movie. Yes, there are a few barbs from the town gossip (Jacqueline De Wit) and a not so kind muscle reference from her son that insinuates that there is an age difference, but that’s not really what All That Heaven Allows is about.  Instead, I view it as an critique on American consumerism and conformity (there’s a reason Cary reads from Thoreau’s Walden).  The thing that seems to rankle Cary’s friends and children the most about Ron is that he’s not one of them—driven by money and having fine, expensive things. 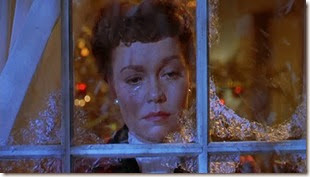 He doesn’t belong, nor does he want to, to their worldview.  And the fact that someone from their social/economic group would want to shed the life that they so value and esteem to live a simple existence is almost anathema to them.  Cary doesn’t want to conform and so she is ostracized by her friends and shamed by her own children.  As a result of doing what others expect of her, she finds herself locked inside a world that holds no meaning for her.  It is only when she realizes that she needs to do what makes her happy that she can truly be free.  In 1955, women, in general, did not do this and I expect the ending of this film was shocking to some—hopefully, it was also enlightening to others.

While she may not be as well remembered as Bette Davis, Katharine Hepburn, Ingrid Bergman, or Barbara Stanwyck, Jane Wyman was a very fine actress who could do comedy or drama, and was also a dancer and a singer.  Wyman, much like Stanwyck, had had a difficult childhood which she used to her advantage when playing characters who needed to draw upon their own internal fortitude to face difficult situations.  And although she was not what one would call a classic beauty, she had a certain personal grace and countenance that was admired by moviegoers.  These qualities, of course, allowed her to play Cary Scott as a gracefully polite woman stifled by the circumstances of her life.  It’s not easy to play a sacrificing woman and not be tinged by sanctimony, but Wyman does an excellent job of melding Cary’s two worlds and personalities into one overall character.  She must be refin 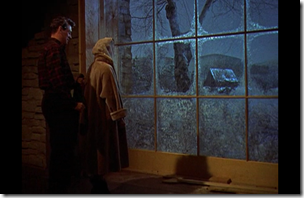 ed, composed, and repressed at certain times, and at others she is free to display desire, unencumbered happiness, and hopefulness—but not too much, because there are voices of doubt that still rattle around in her mind that makes her happiness guarded and almost unrealistic.

Other than Wyman’s performance, the thing that most stands out about All That Heaven Allows is its aesthetic appeal.  Sirk’s cinematographer of choice on this, and many of his most esteemed films, was Russell Metty.  Working in the wonderful, sumptuous world of Technicolor, they created a beautifully lensed picture.  Throughout the movie they use muted colors to heighten the personal alienation and torment of their characters.  Perhaps the most memorable scene in the film is when Cary 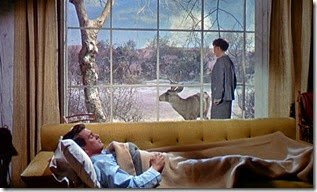 goes to the mill to tell Ron that she’s breaking off their engagement. Set against a Monet-esque snowscape looming outside, Ron’s partly refurbished mill-home is conspicuously and overbearingly full of open space and made up of wood and stone.  Sirk and Metty will revisit this particular setting later in the film when they capture the most lasting image of the film: Cary standing in front of that same snowscape in a fully refurbished home staring at a stag standing right outside the massive window.

If I have one critique of All That Heaven Allows is its heavy-handed use of Franz Liszt’s Consolation No. 3.  Yes, we get it, it’s a melodrama, do we really need to have such overly dramatic music soaring in the background?