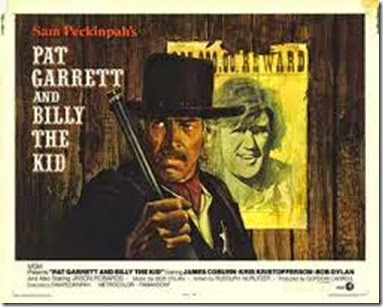 Upon its release, director Sam Peckinpah’s last western, Pat Garrett and Billy the Kid (1973), was a box office and critical failure.  Peckinpah and then MGM president James Aubrey had a severe disagreement regarding the film’s original runtime of over two hours and Aubrey brought in outside editors to trim the film down to 106 minutes. It didn’t help that during filming Peckinpah believed he was being forced to work with substandard equipment and an inexperienced crew because Aubrey wanted to cut production costs.  Additionally, Peckinpah and screenwriter Rudy Wurlitzer didn’t see eye to eye about the movie’s narrative—Peckinpah rewrote sections of the script so that Garret and Billy interact with one another in a few scenes prior to their final showdown, which Wurlitzer had intended to be the only time the characters met on screen.  When Peckinpah saw what Aubrey’s editors had done to his film he sued to have his name removed from it.  He lost, of course, and for more than ten years his directing name was besmirched by the original hot mess theatrical release of Pat Garrett and Billy the Kid. However, like most directors, Peckinpah had his own private preview copy that he liked to show to his friends. This version was released by Turner Home Entertainment in 1988 and led to a

critical rediscovery of what Peckinpah thought was his best film ever.  While I’ve not seen all of his films, I believe I can safely say that other than The Ballad of Cable Hogue (1970), and perhaps Ride the High Country (1962), I’m not overly impressed with his body of work, and I certainly wasn’t overly impressed by his Pat Garrett and Billy the Kid. For me, the best things about the movie are that Bob Dylan wrote “Knocking on Heaven’s Door” for it and James Coburn’s performance as Pat Garrett is riveting. You take these two things away from it and it’s just another drab, violent western.

The story follows Pat Garrett’s (Coburn) pursuit of Billy the Kid (Kris Kristofferson) in 1881 New Mexico.  A former outlaw himself, Garrett has been made sheriff by Billy’s arch-nemesis John Chisum (Barry Sullivan) and is ordered by the New Mexico Territory Governor, Lew Wallace (Jason Robards), to 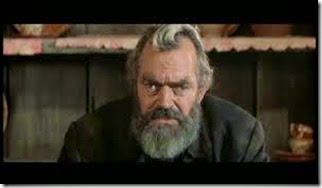 bring the Kid to justice.  This task is hampered by the fact that Billy and Pat are friends and former outlaw colleagues. Having realized the West is changing and the days of the outlaw are slowing dying, Pat chooses to wear a badge and collect money for hunting down outlaws.  This act seems repulsive to him and turns him into a very bitter man, but he still carries out his mission, no matter how loathsome it is to him.

Most of the ancillary cast is comprised of a who’s who of the western genre: Slim Pickens, L.Q. Jones, Paul Fix, Jack Elam, Matt Clark, R.G, Armstrong, Chill Wills, Katy Jurado, and Jason Robards.  They all play minor roles, but both Elam and Robards make the most of the limited screen time that they are given. I’m not exactly sure why Peckinpah chose to showcase Bob Dylan’s superfluous charac

ter, Alias, more than some of the western stalwarts in his cast, but he did—I have read that it was done as a favor to Kristofferson and because Peckinpah was impressed with the title song that Dylan wrote for the movie. Personally, I find his presence distracting—especially when I hear his songs being played while he’s onscreen.

I’d like to say that the two principal leads were evenly matched, but they weren’t.  To say that Kristofferson lacks range would be an understatement. Plus, in what world would he pass for a 21-year-old baby-faced killer? Whereas, James Coburn looks and acts like a grizzled Wild West lawman.  It also helps that he had the acting chops to play a complex character who was conflicted by his past and the

future that he yearned for.  In some scenes he plays Garrett almost whimsically, while in others he must portray a man who is deeply tortured and repulsed by what he must do.  For me, Coburn’s performance is the only thing that makes Pat Garrett and Billy the Kid mildly entertaining.

While I’ve never been a fan of Bob Dylan’s music, I must say that if there was ever an appropriate song written for a bloody western, it was “Knocking on Heaven’s Door”.  Peckinpah’s use of it at the end of the film (and other sections as well) creates an atmosphere of foreboding and then unpleasant reality. Still, I could have done without the theme song that Dylan wrote for the movie.

Overall, Pat Garrett and Billy the Kid is somewhat enjoyable because of James' Coburn’s turn as Pat Garrett.  The movie probably would have been stronger if a more capable actor had played the Kid, but hindsight is 20/20.  The story itself is mildly entertaining, and much better than that of Peckinpah’s The Wild Bunch (1969), but I somewhat agree with Aubrey that the film drags in certain places and would have benefitted from a few cut scenes—maybe not twenty minutes worth, but there is definitely unnecessary fat that could have been trimmed. Additionally, Dylan deserves credit for creating a highly memorable song, “Knocking on Heaven’s Door”, for the picture.