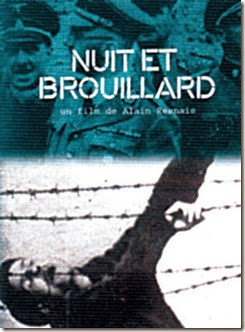 (Warning: Some images in this post may be disturbing.)

Ten years after the end of World War II and the frightening revelation of what Nazi Germany attempted to do to “rid” the world of Jews, French director Alain Resnais made his startling short documentary, Nuit et brouillard (Night and Fog), which unflinchingly documents the horrors of Nazi concentration camps.  The images depicted in the film are startling to watch and serve as a reminder to countless generations that true evil did and does exist in human beings. 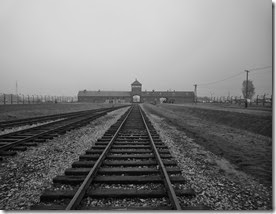 The film opens in color, with the camera capturing the grounds of Auschwitz and Majdanek.  The overgrown and deserted camps look like long-lost factory towns where people may have worked and raised families in a saner world.  However, as the narrator, Michel Bouquet, reminds us, these were places of unimaginable horror. The film transitions to black and white stock photos and newsreel-esque footage to attempt to explain how millions of “deportees” found themselves transported to and then imprisoned, tortured, and killed in these seemingly innocent looking camps.  Yes, the emaciated bodies, hollowed-out faces of the dead, and the mass graves are unfathomable and almost incomprehensible to anyone with a shred of human decency, but perhaps the most perplexing images are those of the detainees first being loaded into the trains that would take them to the camps. The sheer number of people being peacefully herded into the cars, some even waving as the train pulls away, is mind-blowing.  Of course, we, the viewer, know what is in store for these unfortunate souls, so for us it is unconceivable that anyone would get on such a train without being drug onto it.  Yet, these detainees, at least in the early stages of the deportments before horror stories started to be whispered about in the ghettos, had no idea that they were being sent to hell of earth.  Who in their right mind would have imagined the true intentions of the Nazis?

This is why Night and Fog, among other documentaries about genocide, is 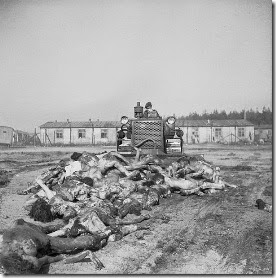 important.  Seemingly normal people put those deportees on the train, ran the train, declothed and deloused the deportees, took all their possessions, denied them adequate food rations and medical care, worked them to death, shot, raped and tortured them, and told them that they were going to take showers when in reality they were going to be gassed.  And, as if that wasn’t enough, they denied them proper burials, removing their teeth for silver and gold and using their bodies to make soap and other “products”—as if they were actual cattle that had arrived in cattle cars to a slaughterhouse. Perhaps one of the most telling scenes in the film is when the guards at the camps are put on trial and they say, “I am not responsible” for which the narrator answers, “Who is responsible then?” At what point did human decency leave these people?

Hanns Eisler’s haunting score intensifies, if that’s even possible, the ghastly and grisly images that pass on the screen.  Decapitated bodies with their heads stacked in a bucket, mounds of bodies being pushed by bulldozers, and innumerable skeletons strewn across the grounds of the camps are beyond horrible to witness.  It is difficult for me to understand how anyone could have seen such images and then went on to commit similar atrocities in places like Cambodia, Serbia, Bosnia, and countless African and South American nations.  Is hate such a strong motivator to enact such heinous acts of evil? 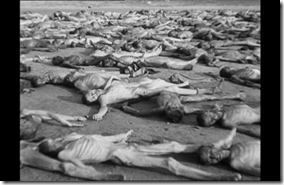 I cannot quibble that the narrator is obviously not attempting to give an unbiased accounting of what happened in the concentration camps, who could be unbiased? What happened in these places was horrible—is there possibly another side to the story? If so, I don’t want to hear it.  My one qualm with the film is that it is too short (although who knows how much more one could actually stand to watch) at 32 minutes.  Perhaps I have been spoiled (and one might even say over-exposed) by such Holocaust documentaries as Shoah (1985) and Hotel Terminus: The Life and Times of Klaus Barbie (1988), but a short excerpt from a camp survivor would have added even more weight to an already powerful and emotionally jarring, no-holds barred look at one of the worst facts about humankind—unspeakable evil is possible.