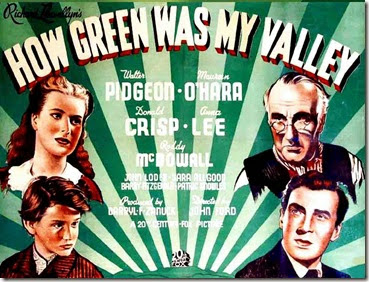 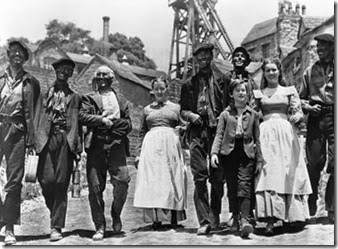 r films that were nominated for Best Picture that year (Blossoms in the Dust, Here Comes Mr. Jordan, Hold Back the Dawn, and One Foot in Heaven). You add this oversight to the fact that Gregg Toland’s cinematography in Citizen Kane lost to Arthur Miller for his camerawork in this, and you make one heck of a depressing film even more…disagreeable.

Based on Richard Llewellyn’s 1939 novel of the same name, the film depicts the trials and tribulations of the Morgan family and their late 1800s Welsh coal-mining village.  Gwilym Sr. (Donald Crisp) and Beth (Sara Allgood) Morgan are the parents of six boys and one very pretty daughter, Angharad (Maureen O’Hara).  All of the Morgan men except the youngest son, Huw (Roddy McDowall), work in the coal mines, while the Morgan women tend to the house that they all live in.  At the start of the story they all seem content with their lives; though t 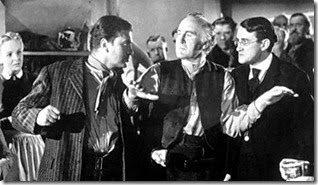 he work is hard, they have a nice home and plenty to eat. However, as the plot progresses and the mine starts to cut wages the family is divided over the possibility of a strike. This division not only drives three of the sons from the family home (the oldest son, Ivor [Patric Knowles], has married Bronwyn [Anna Lee] and lives next door), but also finds the village turning on Gwilym, a leading member of the community, because he is against the strike.  Tragedy abounds for the Morgans, as one son is killed in the mines and eventually the other three sons are discharged from the mine and must make a new start in America, and poor Huw also finds himself temporarily paralyzed for a time.  Oh, and I almost forgot Angharad’s sad fate—she is in love with the village preacher, Mr. Gruffydd (Walter Pidgeon), but finds herself married off to the mine owner’s son (Marten Lamont).  There is nothing uplifting about How Green Was My Valley—a few parties, some singing and intermittent light moments cannot overcome what is a grim, unpleasant story.  And, even when there was one snippet of hope for one of the Morgans—Huw is a smart boy who could apprentice for a middle class job but decides he too should go do 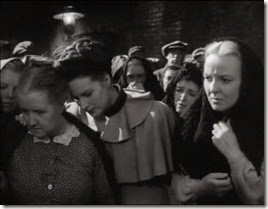 wn into the mines—that is even taken away.

If it’s possible to ignore how completely depressing this movie is, I suppose you could marvel at the production design and appreciate the fine acting by most of the cast.  One of the strange things about How Green Was My Valley that not a lot of people know is that producer Darryl F. Zanuck planned on making it the next Gone with the Wind (1939), shot in Technicolor on location in Wales with a runtime of nearly four hours. He started pre-production with William Wyler as his director, but Zanuck’s ambition and Wyler’s notorious reputation for going over budget and taking forever to make a picture made Twentieth Century Fox place the film on hold. Eventually, Zanuck got the wheels of the production moving again by suggesting that John Ford was just the right director for the project.  While four of the most important parts had been cast by Zanuck and Wyler, M 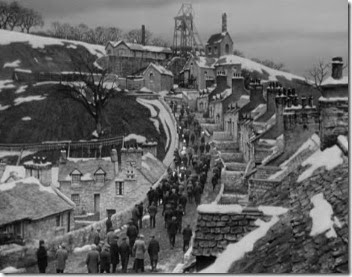 a and Pa Morgan, Huw, and Mr. Gruffydd, it was Ford who cast Lee as Bronwyn and O’Hara as Angharad without screen tests. Lee invented an Irish grandfather and all O’Hara had to do was use her Irish accent and tell stories of her homeland—Ford was a sucker for anything and anyone from his beloved Ireland.

The expertly designed Welsh village is truly amazing. Zanuck had wanted to shoot on location in Wales, but World War II made that impossible and his budget had been drastically cut by Twentieth Century Fox anyway, and so he settled for Brent’s Crag in Malibu.  Zanuck’s Technicolor dream was also abandoned when he realized that Malibu would never match the green valleys of Wales.  The village cost approximately $110,000 to construct and tons upon tons of coal were brought in for the construction of the mines. Anyone who didn’t know better would really believe that How 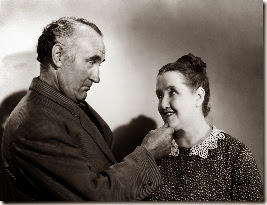 Green Was My Valley was actually filmed in a coal mining village in Wales. Even the coal slag looks real, although it was an illusion created by the hillsides being painted black.

While I hated the story, I loved the characters. Donald Crisp deservedly won a Best Supporting Actor Oscar for his portrayal of Gwilym Morgan.  He is the heart of the film and probably should have been nominated for Best Actor, because without him there would not have been a moral backbone to the story.  Sara Allgood, as his wife, earned a Best Supporting Actress nomination for her spirited performance as one-tough matriarch.  The doomed romance between Mr. Gruffydd and Angharad was bittersweet to watch.  Probably my favorite scene in the film is Angharad’s brazen attempt to get the man she loves to step in 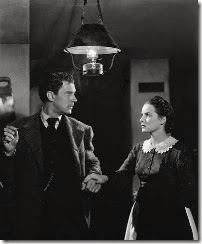 and claim her before she is married off to a man she doesn’t love.  Of course, O’Hara was much too fiery an actress for the always reserved Walter Pidgeon, so she, of course, dominates whenever they are on screen together.

Overall, How Green Was My Valley is a depressingly nostalgic look at an idyllic Welsh mining community destroyed by greed and pollution.  Occasionally happy things occur, but mostly it’s a hard, bitter depiction of the destruction of the pastoral existence.  Oh, John Ford, thankfully you will later redeem yourself with The Quiet Man (1952), and for that I can forgive you for just about anything…even two hours of constant depression.