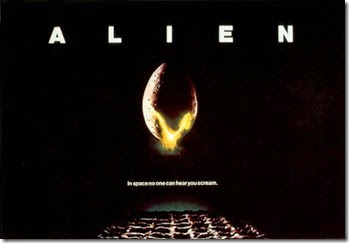 When I was growing up a popular dream job of adolescents was that of astronaut.  In the 1970s and 1980s the U.S. space program was a big deal and, of course, we had grown up watching films like Star Wars (1977), 2001: A Space Odyssey (1968), The Empire Strikes Back (1980), and Alien (1979). Yet, unlike many of my peers I wanted nothing to do with the mysteries of space. To me, anyone crazy enough to want to take a chance with the great unknown of the cosmos could have it—they were the type of people who wound end up being killed by face-hugging and intestinal-destroying aliens.  That’s right, director Ridley Scott’s second feature film, Alien, freaked me out so much that had Neil Armstrong himself stopped by my house to offer me a trip to the moon I would have declined. 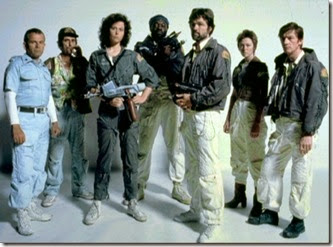 Alien was the brainchild of Dan O’Bannon who combined two popular box office genres, horror and sci-fi, to create probably the best sci-fi horror film ever made. Using a story he’d written with Ronald Shusett, O’Bannon penned the screenplay, which incorporated elements from such sci-fi movies as 2001: A Space Odyssey and The Thing from Another World (1951) with horror flicks like Halloween (1978) and The Texas Chainsaw Massacre (1974). Seven crew members aboard the space tugboat, Nostromo, are on their way back to Earth when they receive an unknown transmission from a nearby planet which awakens them from their space-pod slumber.  Regulations say they must investigate all transmissions and so off to LV-426 (not named in this film but in later sequels) they go. They have a bumpy landing and the ship is damaged, so three crew members, Captain Dallas (Tom Skerritt), Navigator Lambert (Veronica Cartwright), and Officer Kane (John Hurt) go out to investigate LV-426 while Warrant Officer Ripley (Sigourney Weaver), Science Officer Ash (Ian Holm) and Engineers Parker (Yaphet Kotto) and Brett (Harry Dean Stanton) are left to fix the ship and monitor the expedition of the other crew members. The explorers find an underground alien egg farm and after Kane pokes one he suddenly finds his space helmet attached to an octopus-like creature.  Dallas and Lambert bring Kane and the creature back to the ship, which for some reason 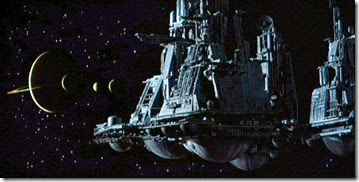 Ash opens after Ripley orders him not to.  The rest of the film is then a series of unfortunate events for the rest of the crew, as they attempt to get the alien off the ship.

Without a doubt the visuals are probably the most spectacular thing about Alien.  The film earned two Academy Award nominations, one for Art Direction and the other for Visual Effects, which it won.  The massive design of the various sections of the 3-deck spaceship and planet LV-426 are pretty awesome, especially when you consider there wasn’t CGI in 1979.  And, of course, the iconic creation of the alien, as well as the creepy android, were highly unique as well. Visual Effects Supervisor Brian Johnson and Bray Studios based many of their designs on Scott’s countless storyboards as well as drawings created by Ron Cobb. What I think sets the alien creatures in the 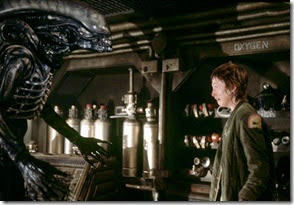 movie apart from their earlier predecessors is just how real the face-hugger, chestburster, and eventually the full-grown alien look.

While Tom Skerritt received top-billing, everyone knows that Weaver was the main character (countless sequels have more than validated this point).  Still, for more than half the movie it seems like this is an ensemble piece, with each crew member having their own fair share of screen time.  Yet, by the time the alien is almost done running amok on the Nostromo there are only two crew members left on the ship: Ripley and Mr. Jones.  Oh, did I forget to mention Mr. Jones?  Mr. Jones is a tabby cat who plays a pivotal role in why I like Alien so much, but he’s also the reason why I don’t absolutely love it.  Please let me explain.

First, Mr. Jones has the honor of being in my favorite shot in the entire film. After being scared away while Ripley, Parker, and Brett are searching for the alien, Mr. Jones has to be found so his motion doesn’t distract the crew from monitoring the motion of the alien.  And, so Brett is sent, alone, to find the cat. This search leads to a massive chain hanging decorated quadrant of the ship.

Instead of jumping into Brett’s arms, Mr. Jones hides behind a door and hisses at what one can only assume is a hiding alien.  When the alien emerges from the entangled chains the scene shifts to and focuses on the cat’s face as Brett is killed by the alien.  It’s such a simple shot, but it’s probably the most memorable one for me.

And, then there’s the most inane, idiotic thing about Alien…who in their right mind would go looking for a cat when you are trying to get materials together for an emergency shuttle escape right before you blow up the ship, and consequently, the alien?  In no world does it make any sense that Ripley, who’s seen members of her crew killed by an alien, would scour the ship for Mr. Jones—especially when you consider that she later throws his cage down right in front of the alien when she comes face to face with it.  Personally, it sort of feels like an anti-feminist statement on the part of Scott and O’Bannon: accomplished single, female space officer would rather save cat than exercise common sense.  Thus, such idiocy takes some of the shine off on otherwise tense and gripping story.