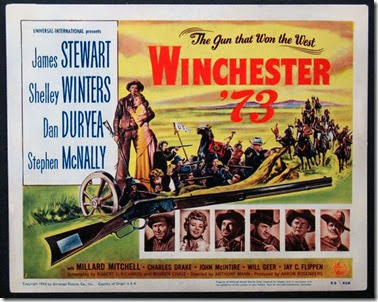 Director Anthony Mann and legendary actor James Stewart made eight films together, five of which were westerns. Their first collaboration was Winchester ‘73 (1950), which is credited as the first “modern western”.  Stewart was 42 years old and worried that he was seen as an actor without range when he was presented with the opportunity to make Winchester ‘73. Fritz Lang had originally been slated as the movie’s director, but 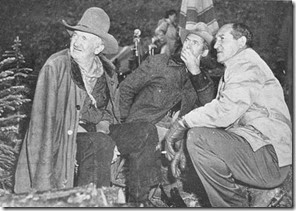 Universal Pictures wasn’t interested in having Lang’s own production company, Diana Productions, produce the film. Plus, Universal studio head William Goetz was trying to nail down a deal with Stewart to make Harvey (1950), which Stewart wanted $200,000 for. A deal was brokered for Stewart to earn 50% of the profits for both Harvey and Winchester ‘73, which also allowed Stewart to pick each film’s cast and director—he chose Mann for Winchester ‘73, and his career and the western genre would never be the same again.

The Mann/Stewart western redefined the western by making the protagonist of the film an ambiguous anti-hero.  Gone was the traditional white-hatted cowboy whose intentions were pure and straightforward. The new western “hero” was often a violent, bitter, and vengeful man who was either seeking redemption or revenge—or maybe both.

Lin McAdam (Stewart) is seeking revenge in Winchester ‘73.  He 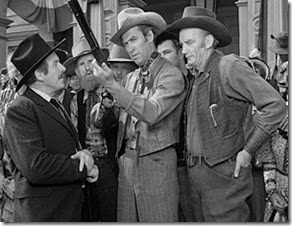 arrives in Dodge City with two aims: winning a shooting contest for a prized Winchester ‘73 rifle and killing the man who shot his father in the back.  An outlaw and no-good bastard by all accounts, Dutch Henry Brown (Stephen McNally) is Lin’s sworn enemy and also ends up being his main competition at the shooting contest.  It’s hardly a surprise that Lin wins the rifle or that Dutch and his crew waylay him in his room and steal it.  From this point on, the Winchester becomes a character on its own—anyone who comes into possession of it, no matter under what circumstances, meets a bad end: Indian trader Lamont (Joe McIntire) gets scalped; Indian chief Young Bull (Rock Hudson) gets mowed down by the cavalry; would-be outlaw Steve Miller (Charles Drake) gets shot by crazy gunslinger, Waco Johnnie Dean (Dan Duryea); and, then there’s the epic battle between Lin and Dutch—one dies and then the other walks away with the rifle. Personally, I think the victor should have tried to sell that cursed rifle as soon as possible.

I’m sure many people will be unhappy that I only gave Winchester ‘73 two out of four stars.  Yes, it is a rather revolutionary film with its reimagining of the western.  However, for me, it doesn’t go far enough and holds onto some of the moralizing effects of the traditional western.  For example, Lin is supposed to be a man hell 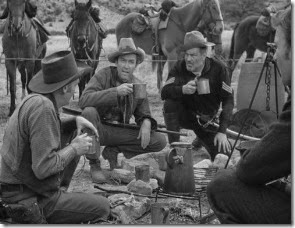 bent on revenge, but he still comes off as hero-esque.  Yes. he’s supposed to be a conflicted man—at his heart he’s a good, decent man but vengeance drives him to hunt down and kill a man. Yet, I don’t really ever see much confliction. I do see him standing with the cavalry against Rock Hudson’s Indians and behaving like a gallant gentleman to dance hall girl Lola Manners (Shelley Winters).  Only in small snippets of conversation with his friend and traveling companion High-Spade (Millard Mitchell) do I slightly sense that perhaps there is something evil brimming in Lin.  Still, the idea that a western would premise itself as a revenge tale with the “hero” acting as judge and executioner was something new.

For my money, I’ll take Stewart in The Man from Laramie (1955) and The Naked 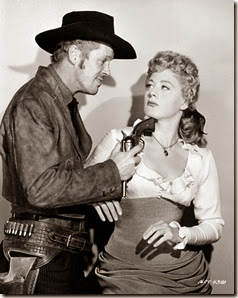 Spur (1953) over his turn in Winchester ‘73. Perhaps it took him a few films to hone the nuances needed for this new character type, but by the time he made The Man from Laramie he had perfected the part.  It may have also helped if Dutch had been played by the great Dan Duryea instead of Stephen McNally, as he would have probably pushed Stewart more, as Arthur Kennedy’s Vic Hansbro does in The Man from Laramie and Robert Ryan’s Ben Vandergroat does in The Naked Spur.

I won’t complain about the fact that Rock Hudson plays an Indian—this is just a sad fact about older Hollywood films that I try to ignore.  And, I won’t say much about Shelley Winter’s Brooklyn accent in the middle of Kansas, either.  Perhaps Lola had made her way west and that was really how she spoke.  Plus, Winter’s rather unique way of portraying tough broads played well here.  Her interactions with Duryea are probably my favorite scenes in the film.

Overall, Winchester ‘73 is to be credited for modernizing and revitalizing the western genre.  It also reshaped Stewart’s career and probably helped him prepare for his later roles in Rear Window (1954) and Vertigo (1958). Yet, for me, Winchester ‘73 lacks a legitimate villain and does not allow Lin to venture down a dark enough path to capitalize on the ambiguity of playing a man who is essentially good but driven by very bad intentions.