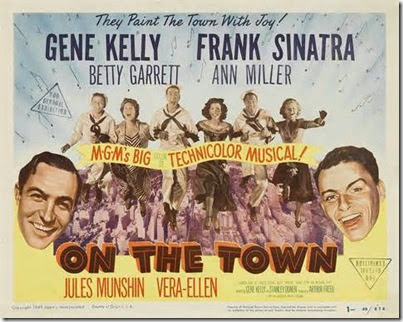 I’m a sucker for a good musical, but there’s one particular aspect of a Gene Kelly musical that I rather don’t like: the soliloquy dance number.  I can forgive the “Singin’ in the Rain” soliloquy because it’s absolutely breathtaking to watch, but the soliloquies in his two other notable musicals, An American in Paris (1951) and On the Town (1949),  really rankle me.  Kelly was an amazing dancer and choreographer, and so I understand that he wanted to show off his immense skills, but these interludes in the action come off, at least to me, as vanity projects that don’t always mesh with the overall productions in which they appear.  This is one of the reasons that I’m not more of a fan of On the Town—the other reason is that other than Betty Garrett’s hilarious turn as Hildy and Ann Miller’s fantastic song-and-dance number, “Prehistoric Man”, I wasn’t overly impressed by anything else. In my opinion, Leonard Bernstein’s music and Roger Edens, Adolph Green, and Betty Comden’s lyrics are rather pedestrian.  Perhaps this is musical heresy, but after 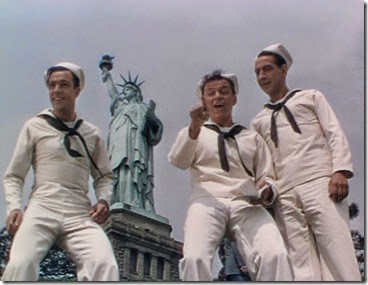 Miller finishes her awesome tap dance at the end of “Prehistoric Man” I could have happily stopped watching the movie and been quite happy.

Kelly co-directed On the Town with Stanley Donen, whom he would go on to make probably the greatest musical ever, Singin’ in the Rain (1952). While they are regaled for the their innovative dance numbers, they should also be remembered as the first directors to shoot a musical number on location.  As On the Town is about three sailors who go on shore leave for one day in New York City, Kelly thought it only right that the film be shot on location.  Of course, this was not a cost-effective way to shoot a musical (or any film for that matter), especially when MGM had an entire lot of studios that had been good enough for countless other musicals, most notably, The Wizard of Oz (1939).  Yet, Kelly persisted and eventually got the green light to shoot nine days’ worth of footage of the sailors visiting various landmarks in NYC, as well as the opening (and closing) number, “New York, New York”.  Most of the sight-seeing scenes were captured by a camera mounted on the back of a station wagon, while “New York, New York” required a bit more traditional way of filming. 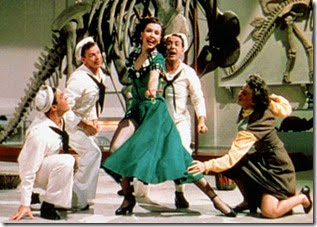 On premise, On the Town is based on Leonard Bernstein’s 1944 Broadway musical of the same name, but Roger Edens changed or omitted several of Bernstein’s songs to appeal to a larger audience—namely he got rid of any hint of opera.  Since I have never seen Bernstein’s original vision of On the Town I cannot say which version is better, but hopefully the Broadway edition had more entertaining and engaging songs.  Still, Edens did create the most memorable number in the film, “Prehistoric Man”, so for that he should be applauded. Maybe I like risqué songs, because there’s a whole heaping load of “oomph” and “ooh la la” in the lyrics of “Prehistoric Man” and Miller sings them with such vim and vigor that you can’t help but be amused.  You add the dazzling tap dance number that she performs while singing this song (with a little help from her backup singers and dancers Kelly, Frank Sinatra, Jules Munshin, and Betty Garrett), which has a tremendous ending to it, and you easily have the best musical number in the movie.

Still, Kelly had to have his moment to shine, too, and so we get to watch him dance, for what seems like forever, the soliloquy ballet number, “A Day in New York”.  Let’s forget that it’s 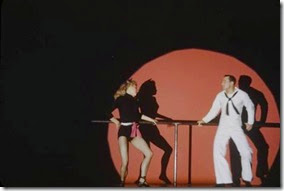 completely useless to the continuity of the musical—although that is also exceedingly annoying to me.  What is most irritating is that the only person, other than himself, from the starring cast who performs the number is Vera-Ellen (who, I must admit, I don’t like), even though part of the sequence includes two male and two female dancers who accompany Kelly.  To me, that’s like saying, “Hey, Frank, Jules, Betty, and Ann, sorry, but you ain’t good enough to do this routine.” And, maybe they weren’t, but that’s beside the point. By making the decision to use other dancers in that scene, Donen and Kelly purposefully chose to disrupt the overall continuity of the film. 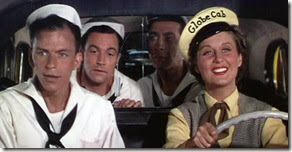 If I had to pick one shining bright spot, other than the “Prehistoric Man” number, in On the Town, it would have to be watching Betty Garrett’s feisty performance as Hildy. Garrett was no Ava Gardner in the looks department, but her Hildy comes across as a wanton woman nonetheless. Her unsubtle sexual innuendo toward Sinatra’s character, Chip, is undeniably worth the price of admission.  Probably the best description of Garrett’s brassy talents came from New York Times columnist Bosley Crowther, who once wrote that Garrett’s “way with a line is homicidal. What’s more she can dance and sing.”

Overall, On the Town is, for me, a one trick pony.  When I watch a musical I want to be wowed by several great song and dance numbers. Here I only got one: “Prehistoric Man”.  This spirited routine coupled with Betty Garrett’s spunky performance is not enough to overcome what I find to be a set of lackluster musical numbers.