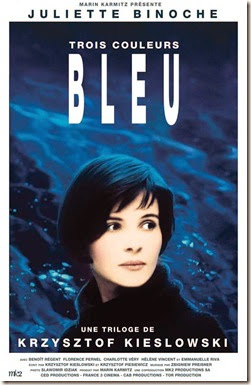 I find it odd that the editors of the 1001 Book only selected two films from director Krzysztof Kieslowski’s Three Colors Trilogy (Blue, White, and Red), as they are all connected in their exploration of the ideals of the French Revolution (and the French tricolor flag)--liberty, equality, and fraternity—and have overlapping themes.  Of the three films, I prefer Red (1994) because of the story arc and Irene Jacob’s phenomenal performance.  That’s not to say that Blue (1993) isn’t good or that Juliette Binoche isn’t compelling as an emotionally withdrawn widow, but the plot is not nearly as interesting as Red’s. And, while I found White (1994) to be the weakest installment of the trilogy, it probably should have made it onto “The List” as a matter of principle, since all of the movies from the Toy Story Trilogy and the Lord of the Rings Trilogy made it even though each of these trilogies had a weak link, too.

Three Colors: Blue (1993), the first entry in the trilogy, was Kieslowski’s analysis of the meaning of emotional liberty.  Binoche plays Julie, a Parisian woman who wakes up from a car accident to learn that both her husband and daughter were killed in the crash. The only way that she can 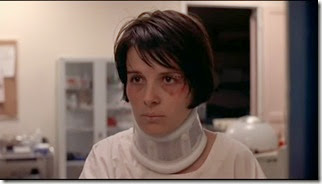 deal with her sudden loss is to completely shut down emotionally. To accomplish this, she decides to shed any “baggage” that reminds her of her prior existence, and so she gets rid of everything except a blue-beaded chandelier that was in her daughter’s room.  She then moves into a half-furnished and half-finished apartment without telling anyone where she’s gone off to.  However, try as she might, she is haunted by a musical score that her husband was supposedly writing for the impending unification of Europe under the EU which she believes she’s destroyed. I say supposedly because Kieslowski’s script seems to imply that Julie is actually the composer but he never explicitly says this. Anyway, when this pesky incomplete score isn’t overwhelming Julie’s solitary moments in the swimming pool or at a café, it causes people like Olivier (Benoit Regent), who is asked by the EU Council to finish the score, to seek her out for guidance or to guilt her into helping.  In the end, Julie must decide between isolation from or unification with other people.

Stylistically, Blue is a French art film with good acting and excellent music.  Kieslowski and his cinematographer, Slawomir Idziak, make numerous visual allusions to the movie’s title by somewhat overwhelming us with various shades of blue.  Forget that key objects, like the 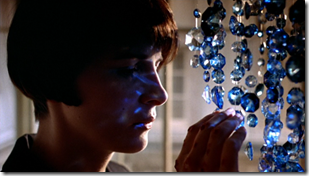 chandelier and the ink used to write the score, are blue, the most striking use of the color documents Julie’s emotional state.  For example, there are several scenes of her swimming alone in an indoor swimming pool that are lensed with blue filters and lighting that are aesthetically unique and pleasing, but that also convey an overwhelming atmosphere of isolation and despair. And, strangely, Kieslowski and Idziak have forever changed my visual interpretation of the color blue by making it an ominous, unrelenting terrorist of the psyche, as anytime Julie thinks of the musical score her mind drowns in a powerful shade of blue. 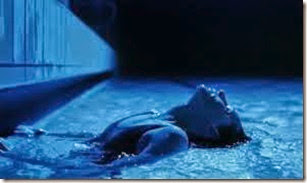 Of course, Kieslowski and Idziak’s aggressive use of the color blue is heightened by Zbigniew Preisner’s dramatic musical score, which sounds quite antagonistic up until it is finally completed.  This, of course, is quite clever, because the score itself becomes a character and serves as Julie’s adversary.  As Julie’s isolation grows so does the intensity of the music. It is not until the ending, and what appears to be Julie’s need to be connected to something, that the tone of the score changes.  Still, the chorus of the finale, taken from 1 Corinthians 13, sounds a little more haunting than what St. Paul probably had in mind when he wrote about the power of love.

Binoche, for her part, is definitely haunting as a woman who refuses to griev 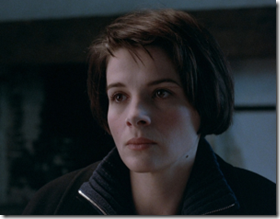 e for those she’s lost.  Maybe that’s why the score doesn’t sound very sentimental, because Julie is incapable of mawkishness. Still, I wonder if Binoche ever got tired of playing such a tightly wound woman.  Plus, her matter of fact conversations with friends and loved ones, most notably the one with her Alzheimer-stricken mother (Emmanuelle Riva), required her to sound quite callous and unfeeling.  It was probably just as emotionally draining for her to play the part as it was for the audience to watch it—if only the story had been more engrossing and less ambiguous.

Overall, Blue is an interesting film to watch because of its cinematic elements, but the story lurks in the realm of ambiguity and drags at certain points.  Perhaps if Kieslowski had cut the entire Charlotte Very as a sex worker/exotic dancer element out of the movie things would have moved along at a brisker pace.