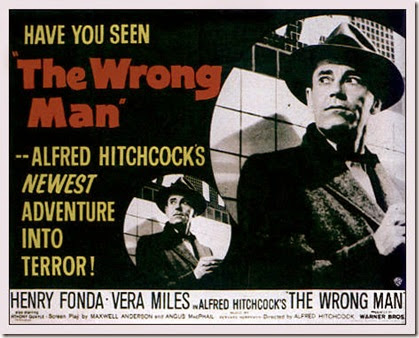 Had Alfred Hitchcock not appeared at the beginning of The Wrong Man (1956) to introduce it and to say that it was different than his other films you wouldn’t believe that the master of suspense directed it.  It doesn’t look like or develop like any other Hitchcock movie I’ve ever seen.  Yes, the Hitchcockian theme of the wrongfully accused man is the centerpiece of the story, but countless other directors also enjoyed employing this plot device.  Furthermore, the poster above is misleading, The Wrong Man is not an “adventure into terror”. Instead, it is a dark and depressing docu-drama that is based on the true story of a man arrested and tried for a crime that he did not commit. This, of course, makes it somewhat difficult for me to say that the story is boring and that the movie drags, but it so desperately does both of these things. 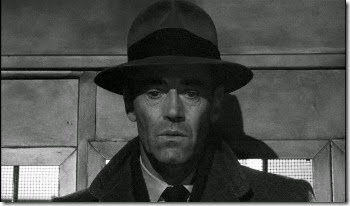 Hitchcock had an unnatural fear of the police and so when he read about Manny Balestrero’s (Henry Fonda) wrongful arrest and subsequent trial for armed robbery, he was intrigued.  And, it is a rather compelling story. A jazz musician at the Stork Club makes the fateful decision to take out a loan against his wife Rose’s (Vera Miles) insurance policy to pay for her to have her wisdom teeth removed.  While at the insurance company, the overly sensitive women who work there mistake Manny for the man who’d robbed them twice in one year. The next thing you know, Manny is picked up by the police, taken on several perp walks, and then arrested for a crime that he did not commit. While out on bail, Manny and his wife try to find witnesses who can prove that he was away on vacation when one of the robberies occurred, but every lead falls through. Surprisingly, his wife has a nervous breakdown and has to be sent to an asylum while Manny stands trial.

If you work very hard you can pinpoint some of Hitchcock’s stylistic elements. He and cinematographer Robert Burks spend a lot of time focusing on the hands of characters and inanimate objects, and there are 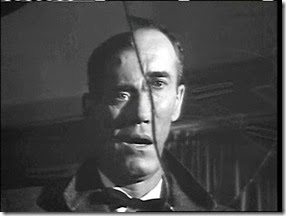 a number of low-angle close-ups of faces—what is sometimes referred to as framing for emotion. Additionally, they shot the booking sequence from Manny’s perspective, which had the effect of involving the audience in his distress. Yet, probably the most Hitchcockian element comes when Manny is placed in a cell for the first time.  After suffering through the humility of being questioned, fingerprinted, and charged for armed robbery, Manny is completely overwhelmed by the insanity of the entire situation by the time he stands alone in his cell. To emphasize Manny’s  confusion and mental anguish the camera appears to start spinning—so much so that it is both disorienting and nauseating to the audience.  However, these few elements, along with a cracked mirror and transposed shot near the movie’s ending, is where any resemblance to a Hitchcock production ends—there isn’t even a MacGuffin that I noticed! 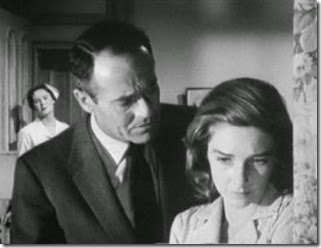 For me, The Wrong Man suffers immensely from Hitchcock’s insistence that the audience experience the entire arrest process.  I know that he wanted to put his audience in Manny’s place, but while it does have some effect, it demands that the story be told at a crawling pace, which allows distraction and boredom to creep in.  Boring is not a word that I often associate with a Hitchcock production, but The Wrong Man is indeed just that.  Plus, his matter-of-fact way of telling the story really doesn’t allow the audience to emotionally connect with either Manny or his wife.  Sadly, when Rose goes off the deep end, I found myself annoyed by her presence and the story arc, as it made the movie even longer than it needed to be.

The one good thing about The Wrong Man is Henry Fonda, who stoically portrays a 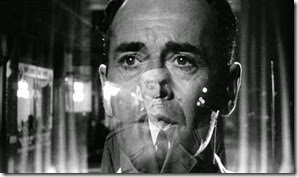 character who should have been at his wit's end but never seems to lose his composure.  Emotionally restrained performances can be difficult for some actors, but Fonda does an excellent job of displaying Manny’s terror through his eyes and body language.  Plus, he capitalized on his own persona as a solid ,trustworthy person to get the audience to be even more outraged by what Manny goes through.

Overall, I am not a fan of The Wrong Man.  The story drags and is often quite boring, which is a black mark for any movie helmed by a master storyteller like Hitchcock.  Thankfully, Fonda’s performance gets me through such tedium.