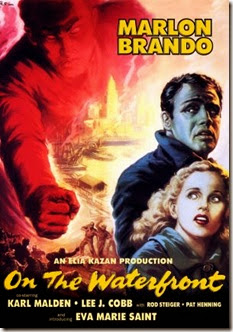 Many modern day viewers of director Elia Kazan’s On the Waterfront (1954) don’t really know what the film is truly about because they are unfamiliar with such things as the Red Scare and method acting.  Yet, for students of film history, there is no doubt that On the Waterfront is Kazan’s own personal defense of his naming of names at the HUAC hearings and his belief in the Method acting (although he’d probably not refer to it as such)technique.  Perhaps he and screenwriter Budd Schulberg deserved the derision they received for giving the HUAC Committee the names of their friends and colleagues, but that does not negate the fact that they created one of the best dramatic films of their generation.  The twelve Academy Award nominations that On the Waterfront received were not a reward for Kazan’s being a “loyal American”—they were earned by mesmerizing actors (Best Actor winner, Marlon Brando; nominated Best Supporting Actors, Lee J. Cobb, Karl Malden, Rod Steiger; and, Best Supporting Actress winner, Eva Marie Saint), a visionary cinematographer (Best Cinematography winner, Boris Kaufman), a gifted editor (Best Editing winner, Gene Milford), a creative art director (Best Art Direction winner, Richard Day), an innovative composer (Best Score nominee, Leonard Bernstein), a daring producer (Best Picture winner, Sam Spiegel), a brilliant screenwriter (Best Screenplay winner, Schulberg), and a revolutionary director (Best Director winner, Kazan). Deride and despise Kazan’s personal actions if you must,  but don’t hate the film because it’s an apologetic allegory of Kazan’s actions; instead, embrace it for the striking movie that it is. The story, based on Malcolm Johnson’s Pulitzer Prize winning Crime on the Waterfront article series that appeared in the New York Sun in 1949, confronts mob corruption in a longshoremen union.  Johnny Friendly (Lee J. Cobb) is a menacing union boss who will stop at nothing to keep control of his cash cow—the longshoremen whom he exploits, bullies, and terrorizes.  When one of the longshoremen, Joey Doyle (Ben Wagner), starts talking to the Crime Commission (Kazan’s stand-in for HUAC), Johnny enlists his lawyer and right-hand man, Charley “The Gent” Malloy (Rod Steiger), to get his brother, Terry (Marlon Brando) to lure Joey unto the rooftop of his building, unaware that Johnny’s goons intend to throw Joey off of it.  A former boxer who seems a bit dim-witted, Terry finds himself filled with remorse over Joey’s death. This remorse is only exacerbated after Joey’s sister, Edie (Eva Marie Saint), becomes the object of Terry’s affection and the local priest, Father Barry (Karl Malden), encourages the men to speak out about the union’s corrupt and murderous practices.  Terry must decide if he should remain D&D (deaf and dumb) or take a stand against what he knows is wrong, even if some of his friends, and even his brother, are brought down by his “ratting”.

So, obviously Terry’s dilemma is a stand-in for Kazan’s decision to 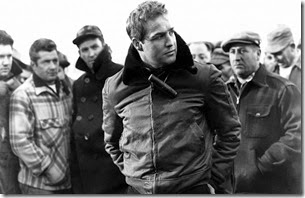 give the names of “known” Communists to the HUAC Committee.  It does irk me a bit that he chose a union organization, be it a corrupt one, to represent Communism, but since unionism is synonymous to some to socialism/communism I suppose it made sense to Kazan and Schulberg (even though Arthur Miller did write the first screenplay, titled The Hook, so maybe this was just a coincidence). Whatever the case may be, the fact remains that both Terry and Kazan “ratted”, but, at least in Terry’s case, for a good reason—Kazan, of course, believed he was justified as well.  Perhaps it was in bad taste to make a film that attempted to justify ruining the lives of friends and colleagues, and I expect that is why Kazan’s name, who’s been dead for over ten years now, is still hissed at today by some.  Yet, there’s more to On the Waterfront than Kazan’s own personal allegory. 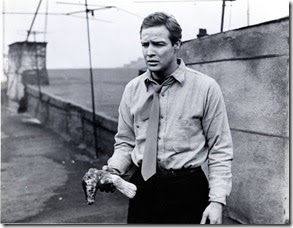 On the Waterfront is considered the masterpiece of Method acting.  Kazan, along with Cheryl Crawford and Robert Lewis, founded the Actors Studio is 1947, which followed the teachings of Konstantin Stanislavski, a Russian dramatist. Method acting, as Stanislavski’s teachings later became known as, emphasizes that a performer stay in the moment and that the internal was more important than the external.  There is no room for over-the-top gestures and emoting in Method acting. Instead, actors/actresses draw on their subconscious memories of pain and pleasure to create a character, which they shape with precisely defined mannerisms, voice inflections/tones, and body language.  As such, the performer can develop characters that transcend labels, such as hero/heroine, damsel-in-distress, villain, or clown. While Kazan and two of his earliest students, Brandon and Malden, had already achieved success with A Streetcar Named Desire (1951) both on the stage and screen, it was On the Waterfront which cemented the “new” acting style and convinced many critics that there was a method to the madness—there was a reason why Brando sounded ina 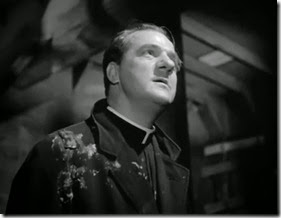 Clearly, Brando is the star of the film.  No actor played inner turmoil better, and no character had as much as Terry Malloy.  Still, Malden’s turn as Father Barry is probably my favorite performance in the film.  The Jesus on Calvary speech he gives in the hull of the ship after Dugan (Pat Henning) is killed is filled with such indignant rage that it raises the hair on my arms each time I see it.  I also really enjoy the few scenes that we get to see Steiger in—at this point in his career he was still a nuanced actor and not a complete ham, as evidenced by his turn in The Specialist (1994).

My least favorite performances come from Saint and Cobb. For me, Saint’s Edie is jus 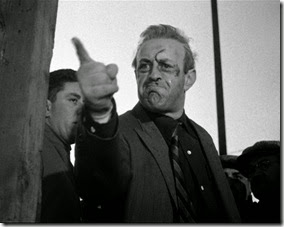 t too hysterical in her quest to find out what happened to her brother.  I’ll admit that I have never been a fan of hers, but at least I could tolerate her in North by Northwest (1959).  In On the Waterfront I find her voice to be even more shrill than usual and her uncanny way of making you dislike an otherwise likable character almost criminal.  More surprisingly to me, at least, is that I was not completely enamored with Cobb’s turn as Johnny Friendly.  For me, there is a disconnect from his performance in the first two-thirds of the film and the last third of the movie.  Cobb was a character actor who specialized in playing menacing SOBs, so Johnny was the perfect role for him.  However, his last few scenes in On the Waterfront seem overacted and don’t come off as true to me.

As mentioned above, I thoroughly enjoyed the Christ on Calvary speech and it 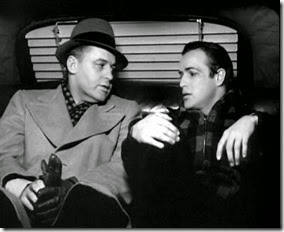 ’s probably my favorite scene in the movie. Of course, the most quoted scene is the one between Terry and Charley in the back of the cab, where Terry says, “I could’a had class. I could’a been a contender. I could’a been somebody, instead of a bum, which is what I am, let's face it. It was you, Charley.”  The resignation that both Steiger and Brando display in this scene is thoroughly engrossing to watch.

And, then there are the scenes which bear the hallmarks of a Kazan picture.  The wandering camera along the shoreline as Terry talks with Father Barry, a conversation which we are not privy to, and the confession scene between Terry and Edie probably bear the Kazan signature the most.  Throughout the story guilt has been building up inside of Terry to the point that he’s ready to explode, and so when he does come clean to Edie all the audience hears is a squealing steam whistle.  For me, although some may disagree, this squealing 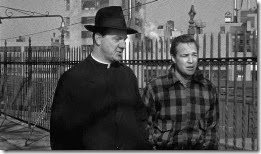 whistle can be construed in two ways: 1) it represent Edie’s rage at what the man she loves has done, or 2) it symbolizes the burden of truth being lifted from the core of Terry’s being. Kazan was a fan of ambiguity, so you read the scene however you want, but you do it without any dialogue, as no words could really express the emotions of the characters.

So, let’s get to the elephant in the room: why did I only give On the Waterfront three out of four stars?  Reason number one, I don’t like how Eva Marie Saint plays Edie.  Reason number two, and 95% of why I always leave the film with a bad taste in my mouth, is the ending.  There is a complete disconnect in the last ten 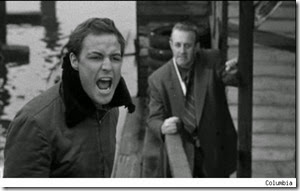 minutes of the film. When Terry goes to the dock after testifying and then every last man shuns him, I get it. But, when he confronts Johnny Friendly and all the men seem to be standing around letting Johnny’s goons beat the crap out of Terry and THEN the men refuse to go into work without Terry leading them in makes absolutely no sense to me.  Perhaps this was Kazan’s own personal vindication scene—he spoke out against Communism, found himself ostracized by former friends and colleagues (although it got much worse after people started speaking out about the evils of the Red Scare in the late 1960s), but still had the personal fortitude and courage to continue to stand up for what he thought was right.  Whatever his intent may have been, the ending is sanctimonious and unpleasant to watch—especially after the first 98 minutes had been so terrific.