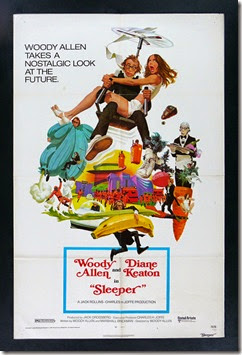 As if poor Woody Allen didn’t have enough problems, he now, unfortunately, reminds me of a most despised man I used to work for.  Same hair, same glasses, same neuroses, and the same condescending nature.  As such, Allen films in which he both stars and directs now have an irrational way of irritating me. It doesn’t help that the main character in Sleeper (1973), Miles Monroe (Allen), has many of the same foibles that my former boss has: health food fanatic, attracted to vapid blonde women, and an unrelenting desire to overcome his inferiority complex by attempting to project that his is the most superior intellect. Now, whenever I watch Sleeper I feel as if I am being forced into some sort of trauma therapy to deal with PTSD.  Still, somehow my irrational dislike of Allen and Miles can’t make me hate Sleeper because it is mildly entertaining in its homage to Buster Keaton, Bob Hope, and the Keystone Cops—and Diane Keaton’s impersonation of Marlon Brando in A Streetcar Named Desire (1951) is hilarious. 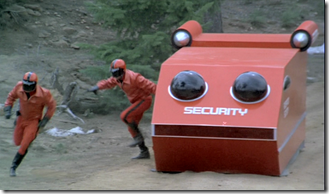 fter being cryogenically frozen after a botched surgery for a peptic ulcer.  The revolutionaries, who have all been fingerprinted, imprinted, and given numbers, believe that they can use Miles, who has not been “Big Brothered”, to find out what the Aries project is.  Pursued by security forces who look a lot like Strumtruppen (SA Stormtroopers) but who act very much like Keystone Cops (I’m sure the irony was not lost on Nazis hiding in South America who saw this), Miles disguises himself as a domestic robot and does his best impression of what would happen if somehow life was created as the result of a threesome involving a mime, the Little Tramp, and Buster Keaton. “Robot” Miles ends up at  pseudo-intellectual and horrible poet Luna’s house where people get high from holding an orb and use a machine called the Orgasmatron to simulate sex.  After revealing his true self to Luna, Miles finds that she has alerted security forces to his whereabouts and they have to go on the run.  Once Luna realizes that the authorities want to reprogram her brain because she had been contaminated by the alien (Miles), she helps Miles with his plan to infiltrate the Aries project.  When he is captured and taken in for brainwashing, Luna joins a Maoist-esque group led by John Beck, who kidnap Miles and use him to destroy the Aries project. 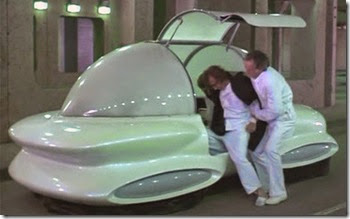 Sleeper could be considered a futurist look at society, I suppose.  It would be a sad look at how little science could progress in 200 years, with cars that look like the eggship that Mork arrived in from Ork and a Sculpted House that looks like a clamshell which was actually built in the early 1960s. The only advance made in society appears to be that cryogenically frozen people can be revived and that cloning is a possibility—baa, baa says Dolly the sheep! Obviously Sleeper is a spoof on the sci-fi genre.  Miles awakens from an H.G. Wells novel (The Sleeper Awakes) in an Orwellian world (1984) where the Government controls everything. References are made to Dr. Spock and even Stanley Kubrick’s 2001: A Space Odyssey (1968) and A Clockwork Orange (1971) are parodied—Alex DeLarge wishes he had Miles’ brainwashing experience, but the evil computer in Sleeper is voiced by Douglas Rain, the same man who did HAL’s voice in 2001, so it was just as creepy. 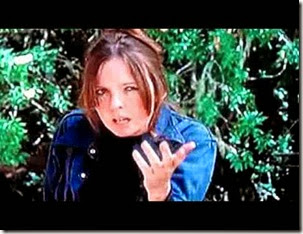 The absolute best thing about Sleeper is Keaton’s spot-on impersonation of Brando in A Streetcar Named Desire. Personally, I could have done without Allen’s take on Vivien Leigh’s Blanche DuBois, but it was obviously necessary in order to see Keaton mimic the man who was playing her father-in-law in The Godfather films.

Overall, Sleeper makes me recall unrelated unhappy times working for a neuroses filled ego-maniac.  Still, there are a few laughs to be had with Allen’s parodying of the sci-fi genre while honoring the early pioneers of physical comedy.