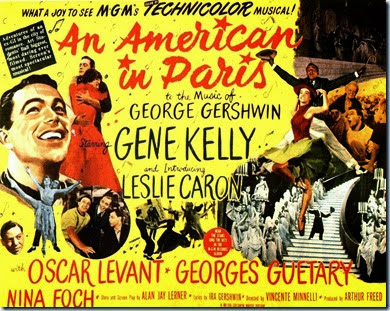 Artistically director Vincent Minnelli’s An American in Paris (1951) is a triumph.  It rightfully earned Oscars for its art direction (Cedric Gibbons, Preston Ames, Edwin B. Willis, and Keogh Gleason) and costume design (Orry-Kelly, Walter Plunkett, and Irene Sharaff), and I suppose one could make the case that its win for Best Music (Johnny Green and Saul Chaplin) wasn’t too far of a stretch—but one could definitely make a valid argument for Adolph Deutsch and Conrad Salinger’s work for Show Boat (1951), too. How 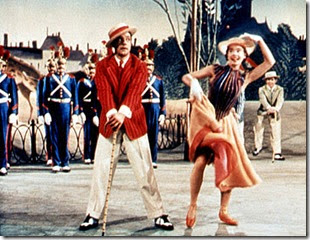 ever, under no circumstance should An American in Paris have won Best Picture over the likes of A Streetcar Named Desire (1951), A Place in the Sun (1951) or even Quo Vadis (1951); and, while the field for Best Screenplay was weak, there is no question that Billy Wilder, Lesser Samuels, and Walter Newman’s script for The Big Carnival (a.k.a. Ace in the Hole, 1951) was far superior to what Alan Jay Lerner produced for An American in Paris. Its win for Best Color Cinematography (Alfred Gilks and John Alton) is a mild irritant since, again, there weren’t any true standouts in the field.  Unlike many of my fellow classic movie fans I don’t like An American in Paris very much.  I hate the story and find the musical numbers less than thrilling.  However, if you are a regular reader of this blog, then you know that my main complaint with An American in Paris is Gene Kelly’s beautifully staged vanity project: a 17-minute ballet performed at the end of the movie.

Jerry Mulligan (Kelly) is a struggling American painter who lives in the most pristine section of Montmartre ever depicted on film.  Friends with a middle-aged child prodigy (Oscar Levant) and successful cabaret singer, Henri (Georges Guetary), Jerry is also “sponsored” by American heiress, Milo Roberts (Nina Foch). Obviously Nina has the hots for Jerry, but that 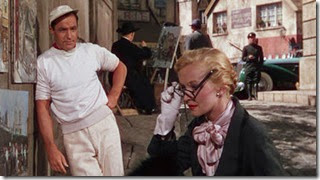 doesn’t stop him from hitting on 19-year-old Lise (Leslie Caron, who was really two years older than her character) at a nightclub right in front of Milo and her friends.  At first, Lise has the good sense to give Jerry the brush off, but eventually she caves into his harassment for a date after he stalks her at her job at a perfumery. But don’t feel bad for Lise, because she’s a two-timer, too. Unbeknownst to Jerry, Lise is engaged to Henri, the man who protected her during the Nazi occupation.  And, that’s the story.  There is absolutely nothing whatsoever that is compelling or engaging about it.  It also doesn’t help that Kelly was twice Caron’s age or that Minnelli and the screenwriters attempted to portray Foch’s Milo as what is now known as a “cougar” when she was twelve years younger than Kelly—this is way more than a mild irritant.

An American in Paris was inspired by George Gershwin’s music, most notably his 1928 orchestral composition of the same name. Several of Gershwin’s notable standards are performed: “Embraceable You “(from Girl Crazy, 1930); “Nice Work If You Can Get It” (from A Damsel in Distress, 1937); “Our Love I 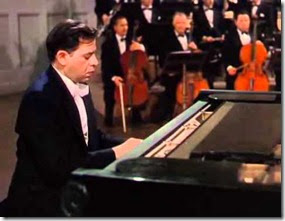 s Here to Stay” (which was a slightly altered version of his “Love Is Here to Stay” from The Goldwyn Follies, 1938); and, “’S Wonderful” (from Funny Face, 1927).  However, the only Gershwin musical number in the entire film that I like is “I Got Rhythm”, and even it pails in comparison to Judy Garland’s performance of it in the lackluster Girl Crazy (1943).  Additionally, right smack in the middle of the movie there is what amounts to an unnecessary intermission when Oscar Levant’s character dreams that he plays every instrument in “Concerto in F for Piano and Orchestra”. His character, Adam, is completely useless to the plot—why must we watch him in an extended 4+ minute sequence?

Gene Kelly could dance, there’s no doubt about it, but how many of the same tap routines must one watch in the same movie?  And, then there are the ballet sequences. I can get over that Kelly and Minnelli chose to introduce their big discovery, Caron, in a hodgepodge ballet number—at this time, she was a ballerina and not an actress.  Moreover, I can somewhat stomach their interpretive dance along the Seine for “Our Love Is Here to Stay”. 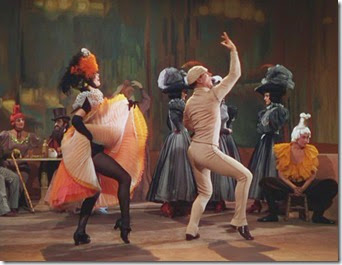 But, that’s where my patience ends.  When Minnelli chooses to do a close-up of Kelly’s Jerry and the film morphs into la-la land (what I assume is Jerry’s subconscious) and for 17 minutes I have to watch a ballet tribute to French art, most notable Toulouse-Lautrec, but the works of Raoul Dufy, Pierre-Auguste Renoir, Maurice Utrillo, Henri Rousseau are also paid homage.  Should the art direction,  costumes, and choreography be commended?  Sure, those things make the film palatable.  Yet, they don’t negate the fact that having a 17-minute ballet as the conclusion of your film is ridiculous. Is it pretty to look at? Yes. Does it drag on for what seems like forever? Yes.  Does it make any difference in the overall plot narrative of the film? No.  And, when your story is already suspect and not the least engaging, why would you choose to end it with a ballet sequence that people can’t wait to be over?  Vanity—particularly, Gene Kelly’s.

So, I know I’m probably in the minority regarding my distaste for An American in Paris.  Frankly, I don’t care.  The story is lackluster. The acting is passable but by no means stellar.  The most memorable musical number is a ballet sequence that has no connection to the plot narrative. Seventeen minutes of spectacular art direction and costume design, and beautiful choreography does not make a film great—especially when the other 96 minutes are only mildly entertaining.