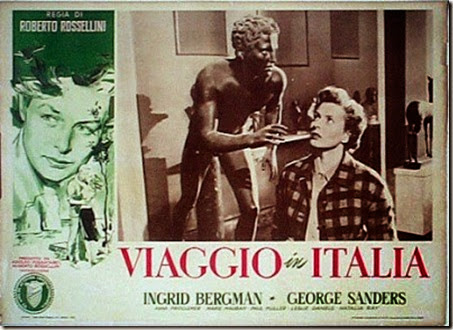 Ingrid Bergman’s “shocking” affair with Italian director Roberto Rossellini was very unfortunate. It wasn’t harmful because they were both married to other people, or that he ran off with another woman seven years after they were married.  No, what was unequivocally catastrophic about their affair was that it caused Bergman’s banishmen 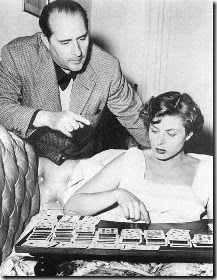 t from the American film industry because by playing a nun in The Bells of St. Mary’s (1945) and Joan of Arc (1948) it was believed that she should have behaved differently than every other actress in Hollywood. No one was calling Bette Davis, Katharine Hepburn, or Joan Crawford out on the floor of the U.S. Senate for immorality. And, so at the ripe old age of 34, and at the height of her acting career, she was banished to Italy to make five forgettable films with Rossellini (Stromboli, Europa ‘51, Voyage to Italy, Fear, and Joan of Arc).  Thankfully, French director Jean Renoir saved her from obscurity by giving her the lead in his fun-loving Elena and Her Men (1956) and 20th Century Fox and director Anatole Litvak brought her back to the States to star in Anastasia (1956), in a role that would win her her second Best Actress Oscar. Oh, but the films she made with Rossellini between 1950-1954… One being today’s entry, Voyage to Italy (Viaggio in Italia).

For years the Italian-language version of Rossellini’s Voyage to Italy was nowhere to be seen (or heard) in the U.S., and  it was originally shown in English. However, quite recently Turner Classic Movies aired the film in its original form (in Italian). Loosely based on Colette’s novel, Duo, the story follows an English couple on their trip to Naples to sell an estate that they’ve recently inherited.  Married for m 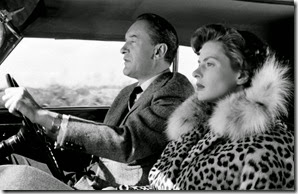 ore than eight years, Alex (George Sanders) and Katharine Joyce (Bergman) quickly realize on their Italian voyage that they don’t really know anything about one another, and what they do know they don’t seem to like.  He’s a workaholic and she’s an artistic type.  While she’s off visiting museums, the Acropolis, and the catacombs, he’s off licking his wounds and looking for a conquest because she happened to mention an old admirer of hers.  I can see why he might be jealous, as Katharine is years younger than him and much more attractive as well, but to get irked because his wife mentions an old admirer who happens to be dead is a bit of a stretch. Anyway, the couple seem to be on the verge of divorce when divine intervention steps in to save the day.

Did I like Voyage to Italy?  Not particularly, but I didn’t dislike it, either. A movie starring Ingrid Bergman would have to be God-awful for me to truly hate it because she’s such a good actress.  Still, she doesn’t get to do a lot of acting in this—she spends m 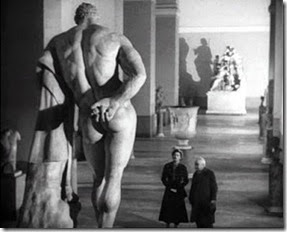 ost of her time combing the cultural sites and either looking horrified or mesmerized by what she sees.  However, the few caustic, but semi-polite, exchanges she has with her worthless husband are entertaining to watch.  Sanders, for his part, looks particularly bored throughout the picture. I’m not sure if this was intentional, as Alex was bored by Italy and probably Joyce as well, but Sanders didn’t seem particularly happy at any point in the movie—he despised the way Rossellini “directed” it.

I’m pretty sure that most of the production was shot on location, and in that sense, at least, it has at least one element of Italian neorealism (however, that particular film period ended in 1952). As such, there is an authentic feel to Voyage to Italy—even if its ending is far from realistic. The fact that Rossellini features the Naples’ National Museum of Archaeology, Duomo Cathedral, hypogea (underground tombs) and, of course, Vesuvius and the ruins of Pompeii makes the film much more enjoyable for me.  You see, I don’t necessarily agree with Francois Truffaut’s assessment that it’s a masterpiece or that it should be labeled as the first modern film—if you are unfamiliar with the French New Wave, here’s a quick history lesson: Truffaut, Godard, and the rest of the Cashiers du Cinema worshiped Voyage to Italy and, as The Guardian has pointed out, saw the film as “the moment when poetic cinema grew up and became indisputably modern”.

Other than the sights explored by Katharine, the most interesting thing about

Voyage to Italy is the climatic staging of the would-be destruction of the Joyce’s marriage.  The couple, rather Alex, matter-of-factly comes to the conclusion that they should get a divorce as they are exploring the ruins of Pompeii.  Perhaps the symbolic correlations between the ruins of a civilization and a marriage is a tad heavy-handed, but nonetheless it was cleverly done.  Still, I’m not exactly sure if this was planned, as most of the movie was shot without a script and Rossellini created most of his “brilliance” haphazardly. 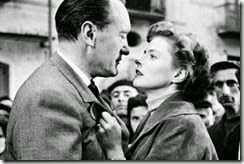 The absolute worst thing about Voyage to Italy is the ending.  I won’t spoil it for those who haven’t seen it, but I can tell you that it has a symbolic staging as well.  Trite is the word that best describes what I think of the ending.  Which, of course, lessens the overall appeal of the movie for me.