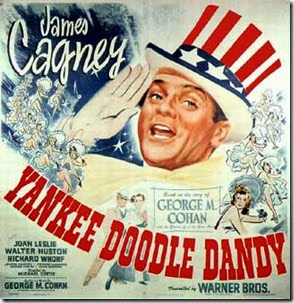 Director Michael Curtiz’s biopic of legendary Broadway producer, writer, and star, George M. Cohan, is mildly entertaining.  James Cagney deservedly won his only Academy Award for his portrayal of Cohan, but once you get past his singing and dancing there isn’t much more to the movie. 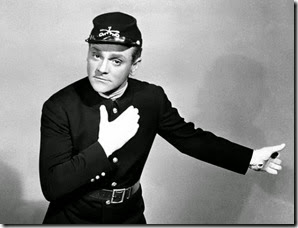 For one, Robert Bucker and Edmund Joseph’s script was a sanitized retelling of how Cohan worked his way up the Great White Way and became “The man who owned Broadway”.  Cohan, although in poor health at the time of production, was a consultant on Yankee Doodle Dandy (1942), and, as such, wanted certain elements of his personal life either glossed over or completely omitted altogether.  Knowing this unpleasant fact takes a lot of the shine off the movie for me.  I am of the opinion that if you’re going to make a biopic it should at least be relatively accurate, since unfortunately so many people learn their “history” from films and television shows.

While I don’t have a problem with the fact that Cagney won the Best Actor Oscar for Yankee Doodle Dandy, I can’t help but wonder if he didn’t benefit from the United States having recently entered World War II. What I mean by this, for those of you who haven’t seen this, is that while the film is obviously a musical and a biography, it is also a propaganda piece as well.  When you start your movie off with a visit to FDR’s office to receive the Congressional Medal of Honor, primarily for writing such  patriotic songs as “Over There” and “A Grand Old Flag”, it’s obvious that some flag waving is being done. 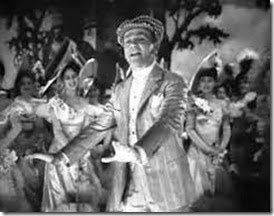 The musical numbers themselves are rather impressive, but unfortunately blackface does rear its ugly head ever so briefly.  Still, the staging and performance of the likes of Yankee Doodle Dandy (Boy) and Harrigan are so well done that I can almost overlook that Cagney wears blackface for a few minutes.  What I can’t overlook, though, is that once the singing and dancing stop the film seems to stagnate. A good musical, in my opinion, should seamlessly flow from the overall story into the musical numbers.  Unfortunately, for me, at least, Yankee Doodle Dandy doesn’t do this and seems clunky whenever the music stops.

Overall, Yankee Doodle Dandy is strong on songs and soft on storytelling.