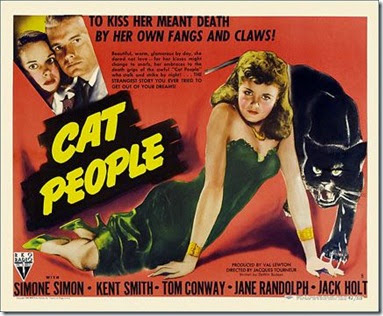 Avid fans of famed horror movie producer Val Lewton will tell you that Cat People (1942) was where it all began for Lewton. Yes, he’d worked as a novelist and “journalist” in the early 1930s, but after achieving success with an early novel, No Bed of Her Own (which was later turned into No Man of Her Own, starring Clark Gable and Carole Lombard), his next three novels flopped and Lewton found himself writing screen treatments for David O. Selznick at MGM.  In 1942 RKO hired Lewton to run its horror division, where he had to make films for under $150,000 and which had to run under 75 minutes. RKO was on the brink of financial ruin when Lewton delivered Cat People in less than one month and under budget by nearly $8,500.  Over the course of a two-year period Cat People raked in almost $4 million for the struggling studio. 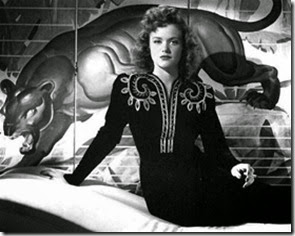 Lewton, for his part, would go on to produce 11 horror films for RKO between 1942-1946, many of which would earn cult status. Some of these films, The Seventh Victim (1943) and I Walked with a Zombie (1943), also appear on the 1001 list.  What all three films that appear on the list have in common is that they are heavy on style and light on substance.  There’s no doubt that the stories are wacky—voodoo and zombies and an ancient Serbian satanic cult of cat women, just to name two plot devices—but what they all did best was to create an atmosphere of dread of the unknown.  Modern horror film audiences would be shocked to know that Lewton’s films rarely exhibited violence or showed blood but that they still elicited tension.

I suppose you could refer to Cat People (1942) as a psychological horror movie since obviously Irena (Simone Simon) has intimacy issues and has to engage in Freudian psycho-babble with Dr. Judd (Tom Conway).  Still, it’s hard to get past the absurdity of Oliver (Kent Smith) marrying a woman who he obviously lusts after but is never permitted to kiss for fear that she might morph into a cat woman and kill him. You’d think after living in close proximity to his sultry wife that Olivier would be the one you’d have to worry about committing crimes but instead it’s Irena who is, quite literally, on the prowl.  As usual with Lewton’s films, I am not certain whether the ridiculousness of the story contributed to the less than stellar acting. 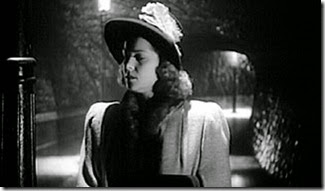 The best thing about Cat People is Nicholas Musuraca’s cinematography. Working under the direction of Jacques Tourneur, Musuraca’s shadow-infused images are what most people remember about the movie.  Two scenes in particular are standouts: the extended stalking sequence down a deserted and dark alleyway and the frightening swimming pool showdown between Irena and Alice (Jane Randolph).

Overall, Cat People is a mildly entertaining horror film.  The story is crazy and the acting is bad, but at least it is visually intriguing.