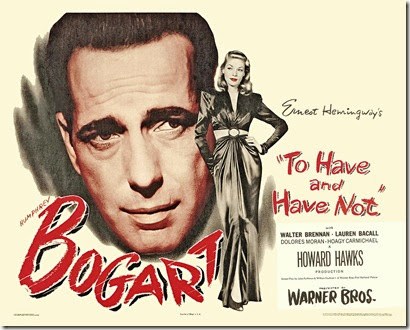 Very, very loosely based on Ernest Hemmingway’s novel of the same name, To Have and Have Not (1944) was the first of four films that Humphrey Bogart and Lauren Bacall made together.  Bacall had been “discovered” by director Howard Hawks after his wife, Nancy “Slim” Keith, showed him Bacall’s cover photo on Harper’s Bazaar and was cast in the film at the age of nineteen, having had no previous movie experience. I expect the reason To Have and Have Not has endured over the years is due to Bogart and Bacall’s sexual chemistry and a few famous lines. I say this because anyone who’s ever seen Casablanca (1942) will tell you that To Have and Have Not is a poor, although somewhat altered, imitation of the classic film starring Bogart and Ingrid Bergman.  Not to be disrespectful, seeing as Bacall just recently passed away, but Bacall was no Bergman when it came to acting ability.  You combine this unfortunate fact with a lackluster script (penned at one time or another by Hawks, Hemmingway, William Faulkner, and Jules Furthman) and you have a motion picture that stands on nothing more than sexual tension. 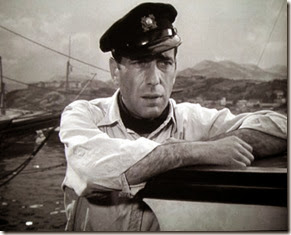 Set in Martinique (not Casablanca’s Morocco, or Hemmingway’s Cuba) following the Fall of France in 1940, the plot revolves around fishing boat captain Steve Morgan’s (Bogart) reluctant assistance to the French Resistance.  A tough-talking American who just wants to make money and hang out with his friend and co-worker, Eddie (Walter Brennan, in one of the few roles I can’t stand him in), Steve finds himself pulled into two unexpected relationships.  The first finds him aiding a French freedom fighter (Walter Surovy) and his wife (Dolores Moran, who saw her role dramatically shrink after Hawks realized he’d struck gold when sparks started flying between Bogart and Bacall) against the Vichy authorities (most notably Dan Seymour, who also appeared in Casablanca).  The second is a romantic relationship with a fast-talking, loose woman named Marie (Bacall) who is nicknamed “Slim” by Steve.  How will Steve save the day? Who knows—the ending is completely ambiguous.

So, I don’t dislike To Have and Have Not, but I don’t think it’s anything special, either.  Of Bogart and Bacall’s four films together, this one probably had the weakest script.  Trying to cash in on B 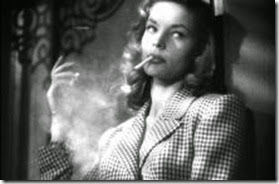 ogart’s success in Casablanca by having so many similarities between the two stories was probably a bad idea—shortcomings are so much more glaring when compared to a superior product.  It doesn’t help that the most memorable things about the film are two questions: “You know how to whistle, don't you, Steve? You just put your lips together and blow” and “Have you ever been stung by a dead bee?”  While one of those questions is amusing, the other, after being asked countless times, becomes excruciatingly annoying.

There’s no denying that Bogart and Bacall sizzle when they are on-screen together.  From the moment she asks, “Anyone got a match?”, you know that Slim is going to be trouble for Steve.  Their relationship works because she’s just as tough as he is and she isn’t afraid to show 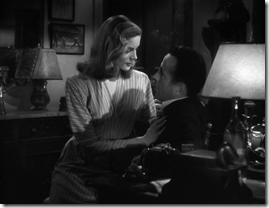 it. I think a lot of people who watch this can see why the couple fell in love off-screen, and this is probably the main reason that To Have and Have Not is considered a classic by many film fans.  I don’t know if I would go so far as to label it as such, but even I have a soft spot for the movie that launched one of Hollywood’s legendary love affairs.

Overall, To Have and Have Not is all about the sexual chemistry between Bogart and Bacall. Once you get past that, the story is lackluster and makes you long to watch a much better film about aiding the French Resistance—Casablanca.