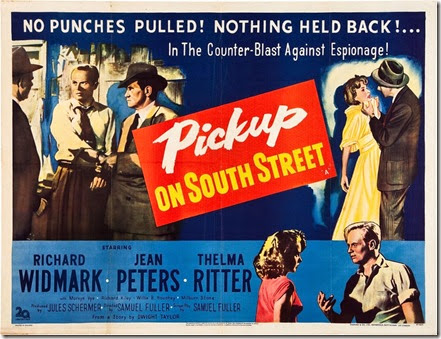 Writer/director Samuel Fuller started working as a crime reporter for the New York Evening Graph when he was just seventeen. This early profession, as well as his time in the U.S. Army during WWII, greatly shaped the films that he made in his fifty year movie career. One of these films, Pickup on South Street (1953), was a crime/spy drama that could have been ripped from the headlines of the early 1950s, during the McCarthy Era, when it was believed that insidious “commies” would stop at nothing to smuggle secrets out of the U.S.  What is unusual about this movie, as c 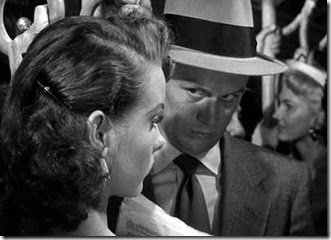 ompared to others of its ilk, is that the “hero” of the story isn’t exactly patriotic (in fact, if he’d had his way, he would have sold the secrets to the “enemy” for $25,000).  J. Edgar Hoover found the whole thing reprehensible and tried to get Fuller to stop using the phrase “flag-waving”, which somehow made it through the censors.  What didn’t make it through, though, were some extremely violent scenes, as well as some touchy-feely stuff between the male and female leads.  That’s not to say that Pickup on South Street isn’t still violent and risqué—because it is--but what eventually made it to the screen was Fuller’s toned down vision.

Skip McCoy (Richard Widmark) is a three-strike pickpocket who chooses the worst mark on a New York subway car: Candy (Jean Peters).  Unbeknownst to Skip (and Candy, too), he pinches a delivery to a communist agent from Candy’s ex-boyfriend that contains a chemical formula on microfilm.  Furthermore, the FBI (most notably, Willis Bouchey) are on the train when it happens and knows that Skip has the microfilm—although they don’t know who he is or where he lives.  For that information they contact Skip’s archenemy, Captain Dan Tiger (Murvyn Vye), who reaches out to well-known and connected stool-pigeon Moe (Thelma Ritter, in yet another Oscar-nominated performance).  But the police aren’t the only people who 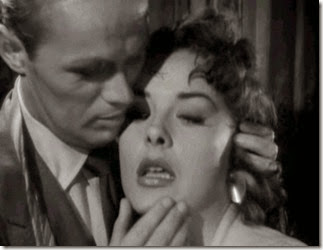 contact Moe, as Candy finds her and pays $50 to learn that Skip lives in a fishing shack.  To say their first meeting doesn’t go well would be an understatement: she gets cold-cocked and then felt up when she comes to.  You’d think this would be enough to turn any woman away, but not Candy, who it is hinted at is a former prostitute. After two very unpleasant encounters with Skip, and the realization that he’d sell state secrets to the commies for $25,000, Candy decides she’s in love with him and is willing to risk her life to save him.  What?

Yes, my main complaint with Pickup on South Street is that I cannot accept the premise that Candy would fall in love (in a matter of minutes) with a man who roughs her up and is a would-be traitor. The idea that she would take a beating, not to mention a bullet, from her ex-boyfriend (Richard Kiley) instead of revealing where Skip lives is beyond disbelief.  I don’t know if in the 1950s male writers like Fuller thought it was okay to use violence against loose women and then reward them with the love of their abusers or what, but as a modern woman I have an extreme 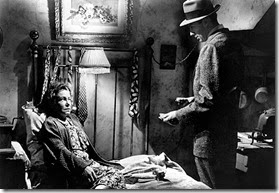 The one sacrifice for Skip in the movie that I can stomach is that of Moe.  Thelma Ritter very rarely got to play dramatic film roles, but she surely showed she could handle them in Pickup on South Street. Her character, obviously in poor health, is trying to earn enough money for a fancy Long Island funeral and to avoid Potter’s Field.  Her matter-of-fact way of selling information is refreshingly callous, but like anyone else she has a limit.  Her limit is aiding and abetting commies and selling out her friends (in this case Skip) to almost certain death.  Her scene with Richard Kiley about just how tired she is is both heartbreaking and brutal—but not in the way you might think. 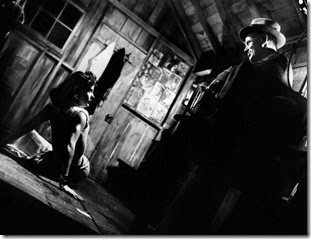 ace in the film is inflicted upon women, I still must commend the way that its framed and shot.  Fuller, along with cinematographer Joseph McDonald, creates a gritty, dark underworld through the use of shadows and noir lighting techniques.  In particular, almost every scene in the fishing shack is not only darkly lit and shadowy (to mimic the dealings that are taking place), but through the use of extreme close-ups, a claustrophobic feel is created. And, even I have to admit, that by using such techniques in some of the more violent scenes that there is an added effect.

Overall, Pickup on South Street is a tightly-knit crime drama.  While I can’t get behind certain premises of the story (most notably the “relationship” between Skip and Candy), it moves at a brisk pace.  Additionally, as noirs go, it is filmed in such a way to emphasize the dark underbelly of not only the criminal world but the possibility (albeit ridiculous) that communists are lurking in the shadows.