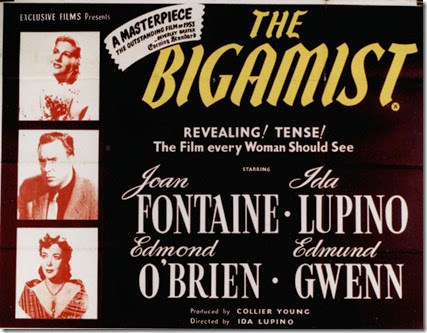 There is an interesting backstory about director Ida Lupino’s The Bigamist (1953).  She and her then husband, the writer, Collier Young, formed Emerald Productions (later called The Filmmakers) in 1947, so that she could make high-quality films that usually centered around provocative subjects.  To her exasperation, she had been relegated to being typecast in B-pictures at Warner Brothers. Her production company gave her the opportunity not only to act in, but also to direct and write a number of unique films. Although Lupino and Collier divorced in 1951, they continued to work together. When production began on The Bigamist, Young and the film’s other female lead, Joan Fontaine, were married. In an ironic twist, a film about a man married to two women ended up being written by a man who was producing it with his ex-wife (who was also the director), and co-starring his current wife.  Only in Hollywood!

The story, written by Young, Larry Marcus, and Lou Schor, is 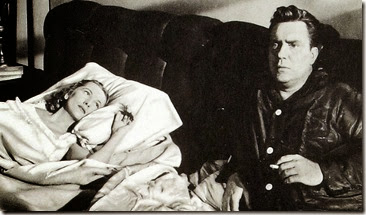 about a traveling freezer salesman who finds himself married to two women at the same time because he’s pretty much an honorable man.  Now, that statement reads and sounds strange, I’m sure, and I’m not condoning bigamy as a practice (personally I believe that any type of marriage should be against the law), but Harry Graham’s (Edmond O’Brien) case is rather unusual.  He loves his first wife, Eve (Fontaine), but they have a complicated relationship.  After learning that she couldn’t have a child of her own, Eve started helping Harry run his business, and it, not Harry, became her main focus. Harry, who spends more time on the road than at home, is a lonely man who longs for companionship.  He gets it with Phyllis (Lupino), but not the kind of companionship you might think. They become genuine friends first and then later, one fateful night, things turn into something more.  Besieged by guilt, Harry returns home and vows never to see Phyllis again, but after months of not seeing her he decides he owes her an explanation.  This is when he learns that Phyllis is pregnant, and being a stand-up guy (don’t laugh) he offers to marry her.  Harry probably could have gotten away with it for years but for one small detail—Eve decides she wants to adopt a child, and that means an investigation by a very nosy adoption agent named Mr. Jordan (Edmund Gwenn).  I won’t spoil the ending because it’s so good (and ambiguous anyway) that you have to see for yourself how the dominos fall for Harry. 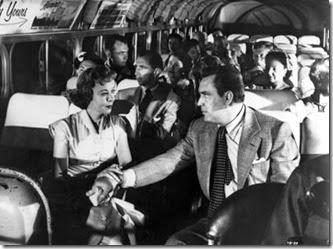 So, Lupino wanted to make movies about provocative subjects—I suppose pre-martial sex, out of wedlock pregnancy, hints at abortion, and bigamy were provocative enough for 1953.  There are a lot of layers to the overall plot of The Bigamist that might irk some feminist film critics, but there are a few things they might like to ponder over for a bit first.  Let’s start with Eve as a woman consumed with growing her business. Is her devotion to the company a surrogate for the child she will never have? Had she been able to have a child, would she have even started working? Is her career blinding her to the fact that her husband is emotionally absent?  Is this why she decides she wants to adopt?  Does Harry seek companionship with Phyllis, a waitress, because he feels emasculated by Eve’s business acumen? And, what about Phyllis—is she a modern woman who doesn’t need the confines of marriage to have sex or is she being punished with a pregnancy because she crossed a societal line? Moreover, does she give into societal norms by marrying Harry? What’s most compelling about The Bigamist is that there is not just one answer to any of those questions.

While I wouldn’t say that the performances were Oscar-worthy (or even Golden Globes worthy), they are passable.  O’Brien, for his part, does a nice job of making Harry a sympathetic character—a tall order, seeing as he was playing a bigamist.  Of course, Lupino wrote the 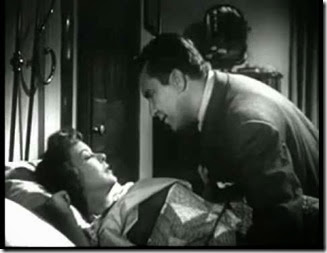 Warner Bros. acting manual on how to portray cynical women who after being stung by love once avoided it like the plague. I can never understand how directors direct themselves—you’d think there would be an objectivity issue somewhere (see Woody Allen)—but Lupino was the first female director to do so.  Her performance is much stronger in the first half of the film than in the second half.  Once Phyllis becomes pregnant, and bedridden, gone is all of her spunk and Lupino seems perturbed by the character she is playing, which is insane because she’s both the director and producer of the movie.  There’s not much to say about Fontaine’s turn as Eve.  This isn’t to say that she does a bad job, but her character is pretty one dimensional, which, of course, hinders her ability to elicit sympathy for her character.

Overall, the best thing about The Bigamist is the rather provocative storyline, which merits an after-viewing discussion. The acting, if not sensational, is passable and does the job of conveying an emotional center to the film, which is played out well in the ambiguous ending.