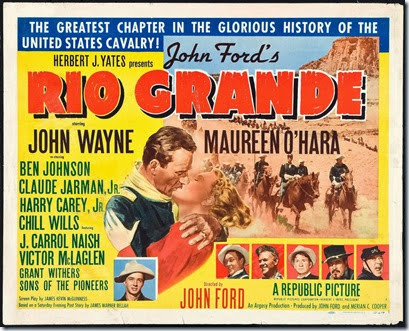 For me, the best thing about director John Ford’s Rio Grande (1950) is that its small budget and huge success ensured that Republic Pictures gave Ford the money he needed to make The Quiet Man (1952). This is not to say that Rio Grande is a bad film, but it certainly isn’t a favorite of mine, either.  This, no doubt, stems from the fact that I’m not a big western fan, and that is definitely what Rio Grande is, albeit a rather soap opera-ish one. 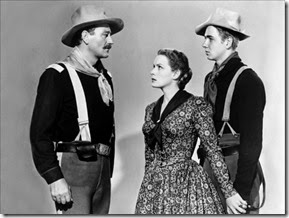 The first of three films that John Ford, John Wayne, and Maureen O’Hara would make together (the others being The Quiet Man and The Wings of Eagles), Rio Grande is considered the final installment in Ford’s “cavalry trilogy” (with Fort Apache and She Wore a Yellow Ribbon, all starring Wayne). Based on James Warner Bellah’s 1947 short story, “Mission with No Record”, Rio Grande tells a strange family reunion tale along the Rio Grande River.  Colonel Kirby Yorke (Wayne) is a Cavalry commander along the Mexico border who is besieged by raiding Apaches who use Mexico as a safe haven in between attacks.  Colonel Yorke’s troubles mount when his son, Trooper Jeff Yorke (Claude Jarman, Jr.), is posted under his command. Having recently flunked out of West Point, Jeff enlisted in the Army as a matter of pride and to emulate a father who he hasn’t seen in over 15 years.  Not long after Jeff’s arrival, Colonel Yorke’s very southern wife, Kathleen (Maureen O’Hara), arrives at the post to pay $100 to have Jeff released from the Army.  While it’s clear that Colonel Yorke and Kathleen still love one another they have two problems to overcome: her insistence that Jeff be released from his enlistment and her anger over Colonel Yorke’s having burnt down her family’s plantation during the siege of Shenandoah during the Civil War.  Complicating this domestic drama are pesky Indians who kidnap a wagon filled with children and a Trooper (Ben Johnson) who is wanted for manslaughter for killing a Yankee who made unwanted advances toward his sister.

While I can’t fault Bert Glennon’s cinematography, which impressively captures Monument Valley, there is no doubt that Rio Grande would have looked a lot better in color.  However, Ford was forced to shoot in black and white to save money that would be later used to capture the emerald gree 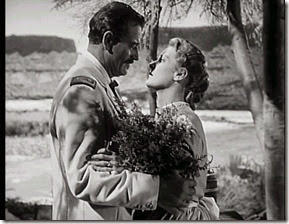 n of Ireland in The Quiet Man. Still, the desert always looks better in color, and this film, for me, suffers from a mundane feel. The Wayne and O’Hara spark wasn’t yet on full display yet (although they definitely have their moments), as this was their very first film together, which somewhat lessens the overall effectiveness of the movie.  Of course, it doesn’t help that their son is so freaking boring, either.  Perhaps if Ben Johnson had played Jeff Yorke instead of Jarman things may have turned out differently—Johnson is a standout here.

Thankfully, Rio Grande is aided by a rather impressive supporting cast: Victor McLaglen, J. Carrol Naish, Chill Willis, and Harry Carey, Jr. While McLaglen and Carey are pigeonholed into playing clownish figures, Naish shines in his brief appearances as General Sheridan.  He looks and acts like someone with the toughest regional command in the military.  Still, the fact that he, and the

audience, has to seem entertained by the fort’s serenading squad (the Sons of the Pioneers) is an unwanted nuisance which happens several times throughout the film. I will harken back to their unnecessary presence here the next time I watch The Quiet Man to see if there is anything that could have been improved by the money that was spent on them here.

Overall, Rio Grande is a moderately entertaining movie.  I expect its importance stems from it being the first collaboration between Wayne and O’Hara, as well as Wayne, O’Hara and Ford.  Yet, for me, there is nothing exceptional about it.