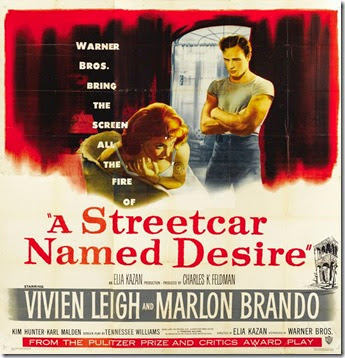 Anyone familiar with the mental health issues that plagued Vivien Leigh in the latter years of her life has to watch director Elia Kazan’s A Streetcar Named Desire (1951) with a sharper eye than those unaware of Leigh’s bi-polar disorder.  It is rumored that near the end of her life that she would sometimes believe she was actually Blanche DuBois, so whenever I watch her Oscar-winning performance in this film I can’t help but try to see where the character begins and the actress ends.  Watching Blanche’s descent into complete madness is, for me at least, like riding on a carousel that never stops spinning.  This is an apt description, of course, because Blanche “hears” carousel organ music whenever she remembers the events that led to her husband’s death—and probably the pivotal incident that led to her slow de 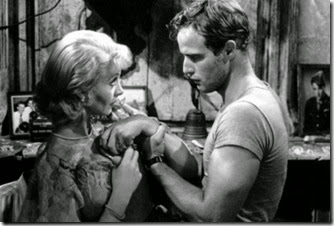 cline toward insanity.  There is an overall atmosphere of depravity and desperation to this movie, and, as such, it is a dark and heavy film which requires the full attention of the viewer—you can’t look away, no matter how brutal things get.

A Streetcar Named Desire is based on the Tennessee Williams stage play of the same name.  With the help of Oscar Saul, Williams adapted his Pulitzer Prize winning play to the screen with some edits.  Obscenity, overt sexuality and rape, and Blanche’s husband’s homosexuality had to be glossed over (or altogether omitted) to get past the censors. While there are a few exterior scenes in the movie, for the most part the film is based in the Kowalski’s cramped and stifling New Orleans apartment.  As such, there is a theatrical feel to the production, but unlike some other stage plays adapted to the screen that come off as artificial, A Streetcar Named Desire benefits from its production design.  Kazan had the set walls designed to be movable so that the walls could progressively close in on Blanche as her madness took complete hold of her. 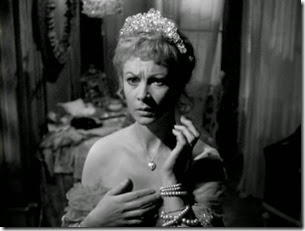 I’d be lying if I didn’t say the first few minutes of watching Blanche’s constant chattering as an affected Southern belle is both disconcerting and annoying.  Each time I watch A Streetcar Named Desire it takes me a good 5-10 minutes to orient myself to her rambling and mannerisms—there’s a lot of crazy to absorb in a short amount of time.  However, once you settle into her “cray cray” world you can’t help but be mesmerized by the inner-workings of her delusional mind.  Leigh completely owns Blanche—as I stated above, it’s difficult to determine where the line between the actress and the role is drawn.

Of course, no performance, however stellar it may be, can stand alone.  Leigh had the good fortune to work with three actors w 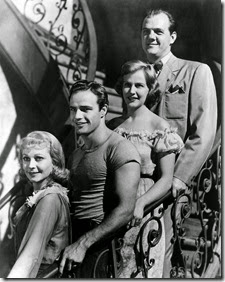 ho knew their own characters inside and out, as Marlon Brando, Kim Hunter, and Karl Malden had also starred in the heralded original Broadway production of the play.  Jessica Tandy had played Blanche in that production, but Leigh, who had starred as Blanche in the London stage production, was deemed a much better box office draw than Tandy. As a result of this, Leigh felt like an outsider working with a cast who’d worked so closely with one another—and all of whom were members of Kazan’s Actors’ Studio.  With a completely different style of acting than her co-workers, Leigh was encouraged to use her “outsider” status to build on Blanche’s own personal isolation.  It must have worked, because all of the principal actors were nominated for Oscars--Leigh won Best Actress; Hunter won Best Supporting Actress; Malden won Best Supporting Actor; and, Brando was nominated as Best Actor.

The fact that Brando lost the Oscar to Humphrey Bogart in The African Queen (1951) is irrelevant, because even though Leigh got top billing and appears in almost every scene of A Streetcar Named Desire, her performance still has the unfortunate fate of being relegated in the a 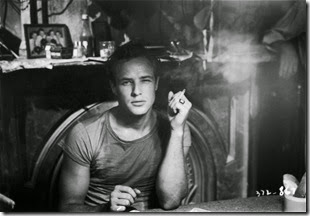 nnals of cinema history to that of Brando’s. In only his second film role, Brando exudes raw sexual magnetism as Stanley Kowalski.  Few actors can play a brutal and cruel man and still come off as a desirable character, but Brando had such an understanding of the dynamics of his character that he developed one of cinema’s greatest anti-heroes in Stanley.  And, of course, who can ever forget his bellowing of “Stell-ahhhh!”?

Overall, A Streetcar Named Desire is the beneficiary of four rather remarkable acting performances.  And, even though some of the meatier sides of the original play were cut for censorship purposes, the story is so brutally told by Kazan that you can’t look away from the train wreck that is Blanche Du Bois’ life.