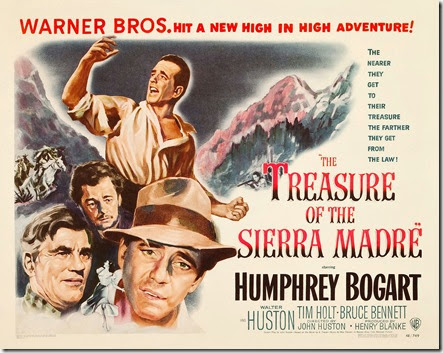 Director John Huston and his father, Walter, showed Hollywood what greed looked like when they took home three Oscars in 1948 for their work in The Treasure of the Sierra Madre (1948).  This was fitting, of course, because greed for gold was what the film was about.  However, I am happy to report that no one had to be shot or macheted for the Huston’s to cash in on all their hard work. 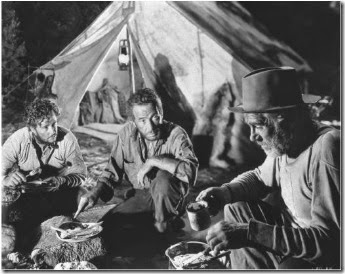 John took home the Oscar for Best Director and earned another one for his adapted screenplay of B. Traven’s 1927 novel of the same name.  Traven, by all accounts, was a bit wacky but probably deserved a share of Huston’s screenplay award because, for the most part, Huston’s script followed the book quite closely.  The story is taut with tension and paranoia and is an excellent study of what greed can do to otherwise decent people. While the corrupting influence of greed was nothing new to cinema—most notably, Erich von Stroheim made his notorious nine-hour film, Greed (1924), about it—The Treasure of the Sierra Madre did it in such a direct and concise manner that it is probably the best film ever made on the subject of the depravity of greed.

The story takes place in 1920s Mexico, where three down on their luck Americans meet in a flop house and discuss prospecting for gold.  Old timer Howard (Walter Huston) tells Dobbs (Humphrey Bogart) and Curtin (Tim Holt) that he knows of a place where they might find a payload of gol 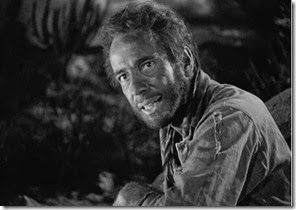 d—the Sierra Madre Mountains. After pooling their money and buying mules and tools, they set off through the rugged terrain in search of gold. Along the way they must fend off outsiders, bandits, and, finally, one another.  From the outset it’s pretty obvious which of the men is the most susceptible to greed—his paranoia drives him over the edge and eventually leads to his ruination.  Though not recognized by the Academy for his menacing performance, Bogart probably turned in the acting job of his life as a man so consumed with paranoia and greed that by the end of the movie his character is almost totally transformed. 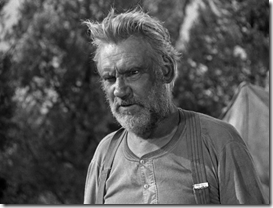 Huston, however, was recognized by the Academy and was awarded a Best Supporting Actor Oscar for his last great screen role. He’d been nominated three previous times, but it was his eccentric, folksy performance as the moral center of this film that finally won him an Oscar.  Anyone who’s seen the movie knows that when we first meet his Howard he seems rather untrustworthy and the most likely to turn on his prospecting partners, but as the story progresses his little nuggets of wisdom about the shortcomings of a man’s soul/character sets him up almost as an oracle from Greek mythology.

The Roman philosopher Seneca once wrote that “For greed all nature is too little”, and The Treasure of the Sierra Madre does an excellent job of proving him correct. One thing that sets the movie apart is the fact that John Huston insisted mo 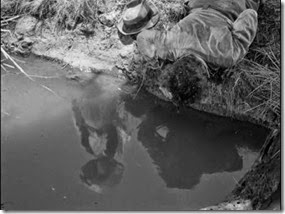 st of it be shot on location in Tampico and Durango, Mexico. This added an element of authenticity to the production, and also incorporated another character to the movie: nature.  The scenes where the men are trudging through the mountainside with the sun beating down on them and dust is flying contributes to the declining psyches of the men.  The gritty realism of these scenes makes it almost understandable than a man could be pushed beyond all morality.

Overall, The Treasure of the Sierra Madre is a tight morality tale about the dangers of greed.  It is filled with great performances and an atmosphere of realism.