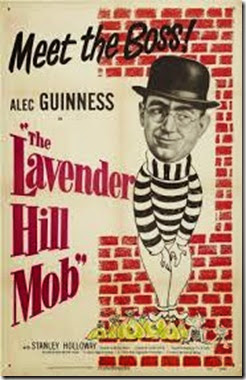 The Book refers to director Charles Crichton’s The Lavender Hill Mob (1951) as the funniest offering that London-based Ealing Studios ever produced.  While there are sincere moments of hilarity in it, I must say that I much prefer both Kind Hearts and Coronets (1949) and The Ladykillers (1955) to this film.  That’s not to say that it is subpar or unentertaining—there are a few laugh-out-loud moments and a rather dizzying scene at the Eiffel Tower that warrant notice, but there are still some shortcomings—most notably the inane car chase scene. 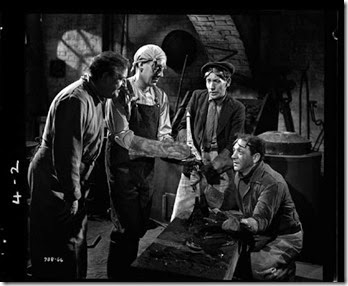 T.E.B. Clarke’s Oscar-winning screenplay is about a gold bullion heist carried out by an unlikely “mob” of “criminals” with an ingenious plan.  Henry Holland (Alex Guinness in an Oscar-nominated performance) is a fastidious bank clerk who is in charge of escorting gold bullion from foundries to the London bank where he works.  For nearly twenty years the seemingly unambitious clerk has been laying the groundwork for his grand heist of bullion.  Why so long, you ask?  Try as he might, Holland could never figure out how to get the bullion out of England without it (and he) being discovered by the authorities. However, fate literally walks through his Lavender Hill boarding house door when Mr. Pendlebury (Stanley Holloway) arrives. When Holland learns that  Pendlebury owns a foundry that exports gold-painted Eiffel Tower paperweights a plan is hatched to switch out the cheap souvenirs with solid gold ones.  They enlist two career criminals (Sidney James and Alfie Bass) to pull off the caper. Surprisingly, the robbery, for the most part, goes off rather smoothly and the “mob” sends their £1 million’s worth of paperweights to Paris.  Unfortunately, a mix up occurs and six British schoolgirls are sold solid gold paperweights while visiting the real Eiffel Tower.  What ensues immediately following this is complete anarchy.

Some people don’t like British humor—I myself am not a fan of the likes of Benny Hill or Dr. Who, but for the most part I have a dry sense of humor.  As such, the very British witticisms and quips that come out of Guinness’ and Holloway’s mouths in The Lavender Hill Mob are amusing.  However, some of the best lines actually come from two ancillary characters: Miss Evesham (Edie Martin) and Mrs. Chalk (Marjorie Fielding).

Mrs. Chalk: But surely you must have some suspicion. Who work the heist rackets in this territory?

Mrs. Chalk: Oh really! I can't make myself much plainer. Which hoodlums around here specialize in toby jobs?

And, there’s no denying that the plot is quite clever, too. The actual 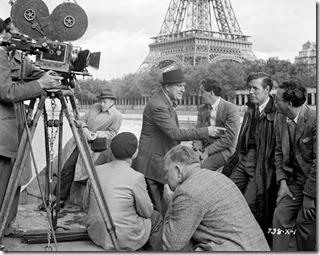 heist itself comprises only a small portion of the 81-minute movie. The rest of the action takes place once Holland and Pendlebury realize that the schoolgirls have the solid gold paperweights.  In fact, the most memorable thing about The Lavender Hill Mob directly happens following this realization: the dizzying descent down the Eiffel Tower spiral staircase.  The camerawork is ingenious, and oh, so nauseating. Obviously Alfred Hitchcock was inspired by this scene, as he used many of the same camera techniques in Vertigo (1958).  However, once the spinning stops for Holland and Pendlebury, The Lavender Hill Mob veers into what I can only describe as the bastard child of the Keystone Cops and Benny Hill (although, of course, the film predated the show).  In particular, I am not a fan of the car chase scene at the end of the film.  Surely, the British police and Scotland Yard are not complete imbeciles that two middle-aged men could elude them. Plus, it seems cheap compared to the rest of the otherwise smart plot developments. 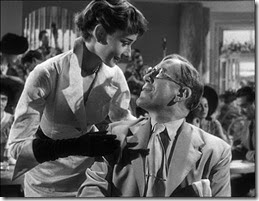 Overall, The Lavender Hill Mob is brimming with British wit.  The overall storyline is quite clever, but the ending leaves me irritated. Still, we do get to see a 22-year old unknown Audrey Hepburn in a walk-on appearances at the beginning of the movie.