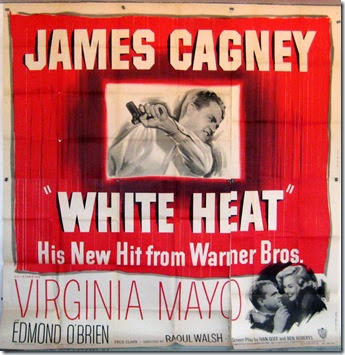 Before Al Pacino and Robert De Niro made playing gangsters their main source of income, James Cagney owned that particular character type.  In films like The Public Enemy (1931),  Angels with Dirty Faces (1938), The Roaring Twenties (1939), White Heat (1951), and Love Me or Leave Me (1955), Cagney wrote the book on playing tough-talking, psychotic hoods.  Of all of these performances, his turn as Cody Jarrett in director Raoul Walsh’s White Heat is probably his most riveting.  Perhaps after being typecast as the quintessential gangster so many times Cagney had perfected the role.  Everything that is good about White Heat is due to his performance, as well as Walsh’s focused storytelling style.

Cody is the leader of a California-based crew who hold up a U.S. mail 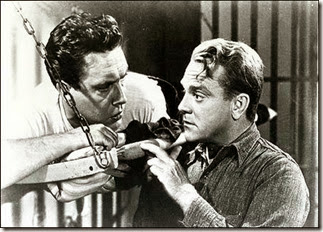 train carrying over $350,000.  This act sets U.S. Treasury investigators on his tail and eventually leads to him confessing to a lesser crime that lands him in the clink for 1 to 3 years.  It is here that he meets an undercover cop named Pardo/Fallon (Edmond O"’Brien) who ingratiates himself to Cody after saving him from an assassination attempt organized by his second in command, Big Ed (Steve Cochran), and his two-timing wife, Verna (Virginia Mayo).  After escaping from prison with a new crew, Cody sets out to even the score with Big Ed and plans a payroll heist at a chemical plant.  All the while, the man who Cody thinks is his new partner, Pardo/Fallon, is setting a trap for him.

What’s interesting about Cody Jarrett, and Cagney’s performance, is that Cody is a complete psychopath, albeit a charming one.  Insanity runs in his family, as both his father and brother totally cracked up and died in asylums, and Cody is no exception.  He has absolutely no problem killing witnesses, strangers, and even members of his gang when they get in his way.  The only person he would think twice about killing is his mother (Margaret Wycherly).  Ma Jarrett and her son have some sort of 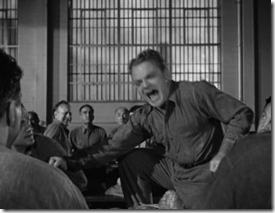 strange symbiotic relationship that had it existed in the real world (though the movie may have been inspired by the Barkers) would have given psychiatrists loads to ponder.  It also sets up one of the best scenes in the film, when Cody learns that Ma has been killed.  The sounds that come out of Cagney after learning of her death echo what one would hear when an animal is being slaughtered. Cody goes totally berserk. The raw, ferocious intensity that Cagney displays in this scene looks and sounds completely real.

Virginia Kellogg’s Oscar-nominated motion picture story, which was turned into a screenplay by Ivan Goff and Ben Roberts, is tightly-wound together by Walsh’s straight-forward directing style.  Known for his ability to trim the fat off of movies, Walsh uses every scene to keep the plot moving forward to its explosive (literally) ending.  This, of course, is what White Heat is most famous for: its ending. From the famous lines Cody says to Pardo/Fallon after he realizes he’s been duped:

A copper, a copper, how do you like that boys? A copper and his name is Fallon. And we went for it, I went for it. Treated him like a kid brother. And I was gonna split fifty-fifty with a copper!

to Cody’s maniacal laughter after being shot by the police atop a gas storage tank, 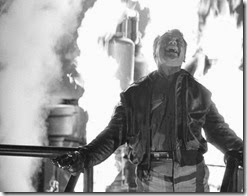 oodles and oodles of gold nuggets escaped to be used as future popular culture references.  And, what better way to go out than with a bang—literally—and in the words of Cody himself, “Made it, Ma! Top of the world!”

I’d be remiss if I didn’t mention Virginia Mayo’s performance as the sultry, manipulative Mrs. Cody Jarrett.  Certainly anyone who’d marry Cody in the first place must have had a screw loose, but Verna is a strange concoction of amusing crazy.  Her back-talk to Cody is both smart and child-like, but it emerges from the body of a woman who has no problem using her looks to get from Point A to Point B.  Mayo 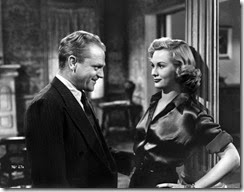 plays well against Cagney.  While her best scenes with him are the ones where she gives as good as she gets, she also has the ability to play a woman truly afraid of her menacing husband.  This, of course, was due to the fact that Mayo was completely frightened by Cagney because she found his performance so realistic.

Overall, White Heat is a tightly constructed crime drama that benefits from the good acting of Cagney and Mayo, as well as from a focused, linear plot.