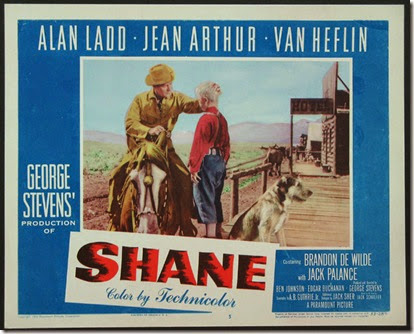 There are memorable endings, and then there are truly memorable endings—director George Stevens’ Shane (1953) resides in the latter category.  Once you’ve seen it, you will never forget it. It takes a lot for a movie to even make me sniffle, let alone out-and-out cry, but Shane’s hauntingly bittersweet conclusion, even after numerous viewings, always makes me weep like a baby.  Perhaps it evokes my own personal understanding of how heartbreaking childhood loss can be. Whatever may be the case, Shane is one of my favorite westerns of all time—and I don’t even really like the genre.

Based on the Jack Schaefer 1949 novel of the same name, Shane is about the struggle between a group of Wyoming Homesteaders and a rancher named Rufus Ryker (Emile Meyer) and 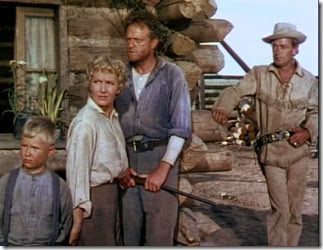 his ranch hands.  Ryker resents the Homesteaders for fencing in his grazing land and cutting his herd off from water. The Homesteaders live in fear of acts of retribution by Ryker’s men.  One family, the Starretts, are of particularly annoyance to Ryker because the head of the Starrett family, Joe (Van Heflin), is a strong-willed man who encourages the other Homesteaders to carry on in the face of Ryker’s intimidation.  As if Joe wasn’t a big enough thorn in Ryker’s side, Joe hires a stoic drifter named Shane (Alan Ladd) to help him around the farm. While it’s never said, it’s obvious that Shane is an adept gunfighter who is trying to escape his past.  The Starretts take him into their family, and their son, Joey (Brandon deWilde), gets one of the worst (and cutest) cases of hero-worship known to childhood.  The mother, Marian (Jean Arthur), also develops a quiet, innocent crush on Shane, too.  When Ryker realizes he’s up against two men, Joe and Shane, who won’t be easily pushed around, he sends for a gunfighter in Cheyenne, named Wilson (Jack Palance), to solve his problems.  What ensues is cold-blooded murder and one of the most iconic showdowns in all of cinema. 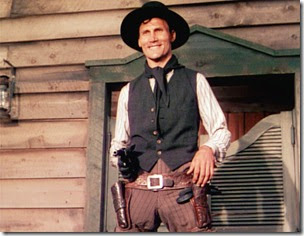 There are many things to admire about Shane.  A.B. Guthrie and Jack Sher’s screenplay does a good job of fleshing out the characters and their motivations, and expertly explains, with a well-constructed dialogue exchange between Ryker and Joe, why ranchers so dislike Homesteaders.  Still, even though the scene in question somewhat humanizes Ryker, the rest of the film does its best to demonize him. The character who is most explained, of course, is Shane.  His conversations with both Joey and Marian about guns explains a lot about how Shane sees the world and himself.  Yet, while the audience gets a clear view of Shane’s motivations, the character of Wilson is pretty one-dimensional.  This is not to say that he isn’t interesting or that Palance didn’t deserve his Best Supporting Actor Oscar nomination, because Palance created one of the meanest (and most memorable) bad guys in film with Wilson.  Dressed in all black and wearing an eerily frozen psychotic grin on his face, Wilson is the personification of evil.

Shane was expertly shot on location near Jackson Hole, Wyoming, surrounded by the Grand Teton Mountains.  Loyal Griggs won an Academy Award for capturing both the picturesque backdro 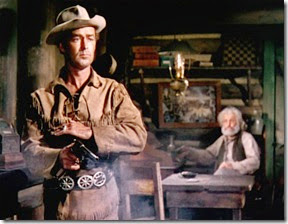 ps of the vast plains surrounded by the mountains, as well as how well he depicted director Stevens’ vision of the final few scenes of the movie, which are comprised of the looming and eventual showdown between Shane and Wilson. The silhouetted images of Shane riding through the night to Grafton’s saloon/store to meet Wilson, with little Joey running behind, creates a feeling of anticipation and dread.  And, then there’s Shane’s entrance. With slow, long loping steps Shane walks across the wooden floorboards of Grafton’s and glides through the swinging bar doors to meet his destiny—only Gary Cooper’s determined walk down the streets of Hadleyville in High Noon (1952) rivals this as the most bad-ass entrance into danger ever. 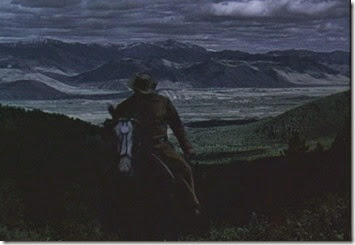 Of course, what most people remember about Shane (besides how evil Wilson was) is the ending. Throughout the film little Joey has become more and more attached to Shane—so much so that it is heartbreaking to watch as he calls after his hero, “Shane! Come back!”  There are several interpretations of what this scene means. Was Shane mortally wounded and riding off into the vast unknown of mortality?  Was he going to return to his gunfighting ways, as exhibited by his comments to Joey that, “A man has to be what he is, Joey. Can't break the mould. I tried it and it didn't work for me” ?  Did he leave because he’d grown too attached to both Joey and Marian?  Who knows, and who cares—just enjoy his quiet ride into the…well, it wasn’t a sunset (more like a purple set), but you get the point.

Alan Ladd, by all accounts, was one of the nicest men in Hollywood, so he obviously didn’t have to put on an act to make Shane so amenable, but that doesn’t negate how effortlessly he plays 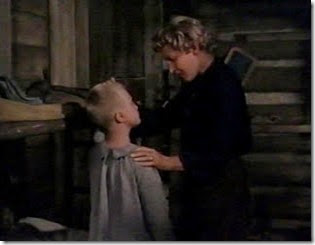 his role.  And while he benefitted from working with an extremely talented cast, it’s never easy working with children.  Yet, somehow his scenes with the doe-eyed Brandon deWilde (who was also nominated for Best Supporting Actor) play very naturally—and sound like conversations you might here between a father and son—nothing appears forced.  Jean Arthur also had the same chemistry with deWilde that Ladd did.  I can’t imagine how Katharine Hepburn, Stevens first choice for the role of Marian, could have ever brought the needed gentleness to the scenes between Marian and Joey.  This was Arthur’s last film role (she actually came out of retirement to do it), and she certainly went out on a high note (unlike poor Hepburn who ended her film career playing Warren Beatty’s aunt in his horrible remake of Love Affair).

Overall, Shane is an iconic western.  It benefits from good acting and stellar cinematography—and perhaps one of the greatest endings in cinematic history.