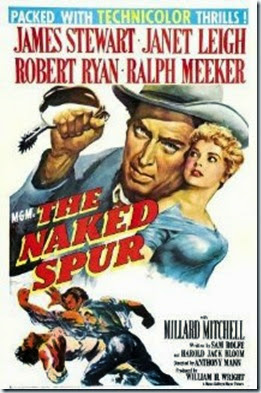 The Naked Spur (1953) is the third of the eight film collaborations between director Anthony Mann and James Stewart.  I have noticed that each proceeding movie seems to get darker than the last. Perhaps this was intentional, as Stewart wanted to play edgier characters and Mann wanted to push the limits of the western genre. Still, I’ve started to notice something fascinating about the Mann/Stewart oeuvre: the “villains” are almost always more interesting than whatever character Stewart is playing.  This is not to say that his characters are one-dimensional—because they’re not—but somehow I find myself more entertained by the bad guys. 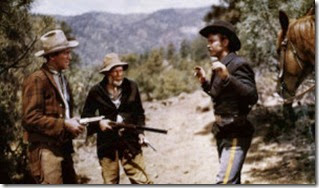 Sam Rolfe and Harold Jack Bloom’s Oscar-nominated screenplay takes place in late 1860s Southwest Colorado.  A newly-minted bounty hunter from Abilene, Kansas, Howie Kemp (Stewart), is in hot pursuit of murderer Ben Vandergroat (Robert Ryan). Howie needs the $5,000 reward to buy back his ranch, which was sold by his two-timing girlfriend while he was fighting in the Civil War. Unfortunately for Howie, he takes on two untrustworthy partners, Jesse (Millard Mitchell) and Roy (Ralph Meeker), who each want a third of the reward. Ben, for his part, is obviously not just a killer but also a good judge of character, because he soon realizes he can easily turn his captors against one another.  It also helps that his sidekick is a pretty young blonde named Lina (Janet Leigh), who catches both Howie and Roy’s eye.  Almost all of the film focuses on how Ben manipulates the men on the long trail back to Abilene.

One of the best things about a Mann/Stewart western is that they are shot on location.  The San Juan Mountains in Durango, Colorado, were usually the rough terrain of Man 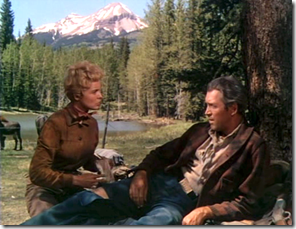 n’s choice, and The Naked Spur was filmed there (along with a few scenes in Lone Pine, California).  Four of the five westerns Mann made with Stewart were shot in Technicolor (the only one that was not was their first effort, Winchester '73, but its success probably enabled the others to be photographed in color), and all were shot in wide-screen format. For me, classic western films lensed on location have an extra degree of authenticity to their studio lot western counterparts. As such, this is one of the main strengths of The Naked Spur. William C. Mellor’s cinematography does a good job of capturing the vastness of the rugged mountainside that must be crossed before Ben can be returned to Abilene.

As noted in previous 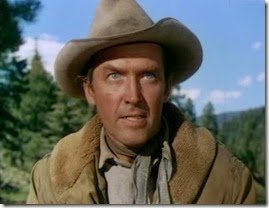 reviews, the Mann/Stewart western redefined the western by making the protagonist of the film an ambiguous anti-hero.  Gone was the traditional white-hatted cowboy whose intentions were pure and straightforward. The new western “hero” was often a violent, bitter, and vengeful man who was either seeking redemption or revenge—or maybe both. Stewart’s Howie had definitely been turned bitter by the betrayal of his girlfriend, and his motivations for capturing Ben had more to do with money than bringing him to justice for killing someone.  As Howie said himself about Ben: “He's not a man; he's a sack of money!”  I must admit that Stewart does a tremendous job of playing a morally conflicted man in this, and that this role is more compelling than the one he played in Winchester ‘73.

Still, as conflicted as Howie is, Ben is far more interesting.  Perhaps 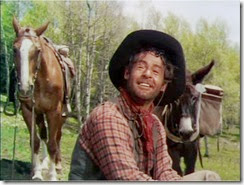 Robert Ryan just knew how to play cynical meanies, but he seems to upstage Stewart in The Naked Spur. His character’s conniving ways combined with the devilish glint in Ryan’s eyes, compounded by the overall humor and callousness of Ben, is probably the best thing about the movie.

Now, the absolute worst thing about The Naked Spur is the character of Lina. I’m not certain, but I have to believe that Mann directed Leigh to speak in a shrill tone in 90% of her scenes. Seriously, I lost count of how many times she screamed“Ben” or sounded totally unpleasant when having conversations with the other men.  And, in what world would a beautiful girl like Lina be hanging out with the 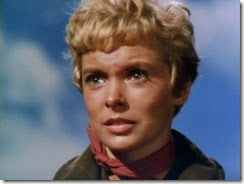 likes of Ben, a friend of her father’s, and old enough to be hers? The same goes for the perceived romance between Lina and Howie. Surely after her father died someone would have wanted to marry her or give her a job in a whorehouse.  Perhaps I just don’t like Leigh for some reason, but, for me, she seems miscast in the role.  Yet, fortunately for her, she was, and she finally found an escape route from ingénue hell at MGM.

Overall, The Naked Spur benefits from being shot on location and from both Ryan and Stewart’s performances.  However, the character of Lina is insipidly annoying.