In 1954 the Supreme Court and Otto Preminger took two giant leaps forward for the Civil Rights Movement. With Brown v. Board of Education, Topeka, Kansas, the Court overruled Plessy v. Ferguson (1896) which had set up Jim Crow and the mantra of “separate but equal”. Now, all public schools had to become desegregated. By producing and directing Carmen Jones, a major studio production starring African Americans, Preminger showed Hollywood and America that a film comprised mostly of a minority cast could be hugely profitable and entertaining. The fact that he decided to carry on an affair for years with his leading lady, Dorothy Dandridge, is another issue—especially when you consider he was married and she was emotionally troubled. Nonetheless, this is a film that holds major cultural and historical significance and has been preserved by the National Film Registry.

At the start of the film we meet Cindy Lou (Olga James), a sweet girl who goes to say goodbye to her boyfriend Joe (Harry Belafonte), who is leaving for flight school. They decide to get married before he leaves, but a complication arises when Carmen Jones enters the picture. Oozing sexuality and attitude, Carmen is either wanted or detested by every man she comes into contact. One of those who detest her, mainly because she blew him off, is Sgt. Brown (Brock Peters). So when Carmen gets into a fight with a co-worker for reporting her late, Sgt. Brown cancels Joe's leave and orders him to take Carmen to the authorities in Masonville.

On the ride, Carmen makes several passes at Joe, but he rebuffs her advances. This just seems to entice Carmen more—you know the lyrics to “Dat’s Love” right?

You go for me and I'm taboo
But if you're hard to get, I'll go for you
And if I do, then you are through
my baby, that's the end of you

In an attempt to cut the trip short, Joe decides to take a dangerous road to Masonville and the jeep 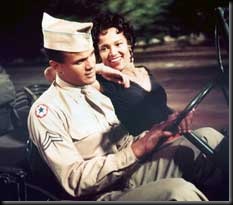 ends up in a river. Carmen suggests they go to her grandmother’s house and catch the train to Masonville later that evening. In a scene reminiscent of Adam and Eve, except this time a peach is substituted for an apple, Carmen lures Joe into bed by brushing mud off his pants and giving him a peach. When he awakens the next morning he finds a note saying she loves him but she’s skipped town because she doesn’t want to go to jail. So instead, Joe finds himself locked up for allowing her to escape. When Cindy Lou visits him she sees a package with a rose inside sent from Carmen and she’s had enough.

While Joe is working in the stockade, Carmen is in Louisiana working at a night club. Bored and growing impatient for Joe’s release, Carmen is tempted by flashy prizefighter Husky Miller’s (Marvin Hayes) offer to take her and her friends Frankie and Myrt (Pearl Bailey and a striking Diahann Carroll) to Chicago and to lavish diamonds and furs on her.

Oddly enough, Carmen decides to wait for Joe. I suppose this is the dichotomy of Carmen—she wants to make sure she has Joe before she returns to her usual ways. Anyway, Joe walks in the door the same evening this proposition is made, but Carmen’s joy is short-lived since Joe tells her he must leave immediately for flight school. Oh, no you didn’t! Carmen can’t believe any man would leave her for flight school and flies into a rage. Just then old Sgt. Brown appears and insults Joe, and tries to leave with Carmen. Joe beats him to a pulp, but then has to flee with Carmen to Chicago to avoid going to prison for hitting a superior officer. 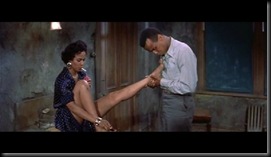 Wanted by the military police for desertion, Joe must hide out in a run-down rented room while Carmen can come and go as she pleases. Carmen goes to visit Frankie, who is wearing diamonds and nice clothes, at Husky's gym to borrow some money. Frankie tries to persuade Carmen to leave Joe, but she refuses. When she returns to Joe with a bag of groceries, he asks her how she got the money and they have a heated argument and Carmen leaves and goes to Husky's 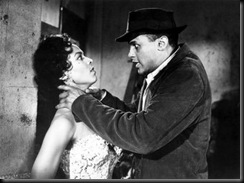 hotel suite. While playing cards with her friends, she draws the nine of spades. Evidently there is some sort of voodoo omen that says if you draw this card your death is imminent. As such, Carmen decides she’s going to live her last days to the hilt and takes up with Husky and a whole lot of liqueur.

Having had enough of Carmen’s wayward ways, Joe goes to the gym and orders Carmen home. When Carmen refuses to leave, Joe threatens Husky with a knife. Of course, this exposes Joe and leads the military police to start looking for him in Chicago. While Carmen helps Joe evade capture, she’s done with him. This is too much for Joe, and during one of Husky’s fights, Joe pulls Carmen into a storage closet and after she refuses to leave with him he strangles her to death with his bare hands just before the police arrive and lead him off to jail. See, that voodoo stuff ain’t no joke!

nd Dandridge were singers, so it might surprise some to learn that their singing was dubbed by LeVern Hutcherson and Marilynn Horne. This was done because neither Belafonte or Dandridge had the necessary voices to carry off the operatic singing. Yet, rest assured that Pearl Bailey did her own singing on "Beat Out Dat Rhythm On A Drum". All of the music is from Bizet’s original Carmen. Oscar Hammerstein II wrote the modern lyrics for the film.

Dorothy Dandridge is phenomenal as Carmen. She truly deserved her Oscar nomination—even is she didn’t do her own singing. The performance is multi-faceted in that viewers get to see her play both a sensual woman of the world as well as a woman torn by a compassionate nature towards Joe. It must have been dazzling to be the first African American woman nominated as a lead actress. It’s a shame that she had so many problems off-screen and also that she was working at a time in Hollywood when black actresses weren’t given many chances to shine. Though she did get another opportunity with Porgy and Bess, the last few years of her career and life were pretty dreary.

The music is great and the story is compelling. A truly wonderful musical that is entertaining and well-acted. In addition, the historical significance of this film is extraordinary.