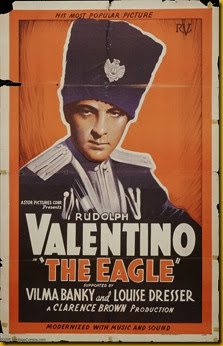 Rudolph Valentino was an attractive man with an aura of sophistication.  While Buster Keaton, Charlie Chaplin, and Harold Lloyd ruled comedy in the silent film era, Valentino, along with John Gilbert, reigned supreme when it came to dramatic romantic heroes.  I have only seen a few of his films, but from what I’ve watched of his work, Valentino excelled at looking good while not doing that much.  Now, I don’t mean that as a jab—quite the opposite, actually.  Many silent era actors and actresses had a bad habit of over-e 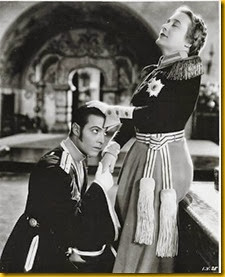 moting and over-using facial gestures and hand movements. Valentino, at least in The Eagle (1925), avoids such behaviors.  Yes, the overall plot is ridiculous, but at least the acting was not (except James A. Marcus—he was bad).

Vladimir Dubrovsky (Valentino) is a lieutenant in the Russian Imperial Guard. His daring rescue of a runaway carriage and the Czarina’s (Louise Dresser) prized horse places him in the path of Catherine II.  Obviously hot to trot, even while wearing an unflattering military uniform, the Czarina wants Vladimir as her new conquest.  When he rebuffs her advances the Czarina puts a bounty out on his head. This, in turn, causes him to return home just in time to find his father (Spottiswoode Aitken) broke and dying.  The Dubrovsky estate has been stolen by a cowardly heel named Kyrilla Troekouroff (Marcus).  Vladimir takes an oath of vengeance and begins wearing a black mask and calling himself the Black Eagle—yes, if this sounds a bit like Zorro, it is, but there is no Douglas Fairbanks, Sr.

about The Eagle is that although there is romantic drama, it is a comedy at heart.  Valentino was not really known for his comedic skills, but in this picture he gets to showcase his natural comedic abilities.  He not only plays a man riding the Russian countryside wearing a black mask, but he also impersonates a French tutor in order to get close to Kyrilla’s daughter, Mascha (Vilma Banky), whom he finds quite beautiful.  The film turns into a bit of a farce once Mascha figures out who her tutor really is, which affords Valentino an opportunity to use that twinkle in his eye for more than seducing women.

Stylistically The Eagle is rememb 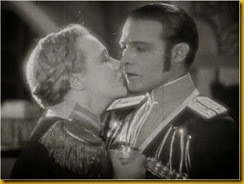 ered for a tracking shot of a banquet table full of guests and food.  Director Clarence Brown was one of the few silent directors who had an enormously successful career in the talkies.  He had an eye for naturalism, and it shows with how he handles his actors in this movie.  He obviously knew how to work with “personalities” because he often found himself directing not only Hollywood stars like Valentino, but Greta Garbo and Joan Crawford as well.

While the ending of The Eagle is completely absurd, overall it is an entertaining movie.  Valentino and Banky have nice chemistry—neither one seems to dominate the other and the play well together. Marcus is a bit of a ham, but his character was worth a laugh or two.  And, poor Dresser gets to play an aging Czarina who would rather have people shot than be rejected sexually.  So, even though the story is ridiculous, at least the movie is full of delightful characters.