What is the price of fame? According to this 1925 silent classic staring Lon Chaney a deal with the devil…no, no, no that’s Faust; I mean a creepy Phantom. Please excuse my mistake; it was an easy one to make seeing as the opera performed in this film is Faust. Coincidence? I think not.

Christine (Mary Philbin), the understudy to the prima donna, has a mysterious voice coach who first communicates to her through the walls and then later in a face to mask meeting that she will be the star of the show, but only if she gives everything up but him and the opera. No, she’s not a schizophrenic, just so hell-bent on being a diva that she’ll do just about anything to get ahead—think Mariah 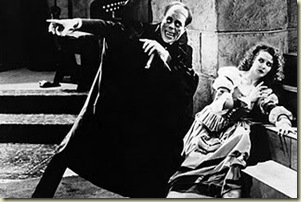 Carey in the Tommy Mottola years. He causes all kinds of mischief to ensure this—threatening notes to the lackluster prima donna and dropping a chandelier on the audience to end a performance. Christine’s very annoying boyfriend, Raoul, wants her to give it all up and marry him, and since she is starting to get weirded out by the Phantom she agrees. This makes the Phantom jealous and so he kidnaps Christine and takes her to his man-cave. Instead of seeing posters of his favorite team and his collection of shot glasses, she sees his hideous skullface. To emphasize how shocking his face was the camera actually went out of focus. Eventually, Christine is rescued and the Phantom is chased by an angry mob to his drowning death in the Seine.

This film is ultra-melodramatic, but it is watchable due to the creepiness of Lon Chaney’s Phantom and the great set designs. The underground tunnel scenes are the best, with the unmasking of the Phantom and Raoul’s near-death experience in a torture room where the heat is unbearable (see Hell and Faust), Personally, I wished he had used the provided noose. But I digress. Anyway, the music is eerie and Lon Chaney is stellar. A good watch in October.