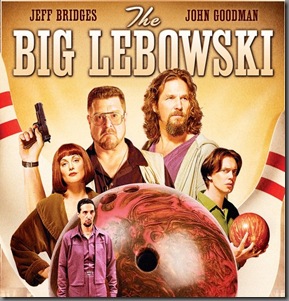 A plethora of who’s who comprises the cast of this 1998 Coen Brothers comedy about a case of mistaken identity gone terribly awry.  The Big Lebowski is chock full of memorable performances and has a far-out plot loosely based on the 1939 Raymond Chandler novel, The Big Sleep (which was first made into a movie in 1946, starring Humphrey Bogart as Detective Philip Marlowe). Like many early Coen Brothers’ films this was not a commercial success; however, over the years it has become a cult favorite. While I’m not a huge fan of this, I do admire the acting and the bizarre plot. 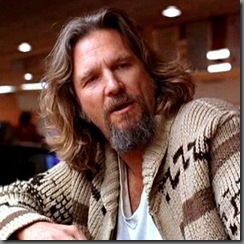 What I like about most Coen Brothers’ films is that they are always unique in their own special way.  This one has a quirky hippie vibe—what with The Dude al 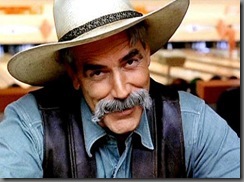 ways smoking a doobie and Walter constantly referring to ‘Nam—but it also has a biting edge to it, especially when depicting the art world and nihilism.  Somehow these people from completely different social spectrums meet and create a chaos that is, well, rather paradoxically, a form of artistic nihilism.  While the story has some fat that could be trimmed (specifically the two appearances of Sam Elliott as “The Stranger”), overall most of the pieces of the messy plot come together in the end. 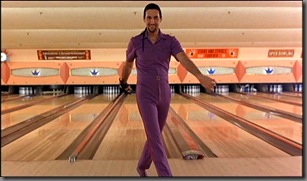 As for the acting, just about every character is memorably played by some of the finest actors in Hollywood today. However, there are three performances that standout above the rest.  First, John Turturro is virtually unrecognizable as Jesus, a bowling rival of The Dude’s team.  Playing a Latino with a heavy Cuban accent who went to prison for exposing himself to an eight-year-old girl, Turturro plays on every stereotype you can imagine.  Jesus’ clothes are way too tight, he is overtly sexual, and his machismo is beyond measure.  For such a small part, it turned out to be one of Turturro’s most memorable. 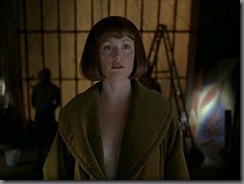 owski, the Big Lebowski’s estranged daughter.  When you make your entrance in an overhead harness completely nude you must have gusto.  Playing an avant-garde artist with no inhibitions, Moore makes you pay attention to every word that comes out of her mouth in a clipped, faux British accent.  Maude would be pretentious if she weren’t so damn serious!  Some of the words that come out of Moore’s mouth would sound so wrong if they weren’t delivered by an actress who knew how to play her part to the fullest.

Finally, while I know Bridges is the star of the movie, it is Goodman who is the standout.  I don’t know what it is, but he has a habit of stealing whatever film he is in—even as a co-star or in a cameo perfor 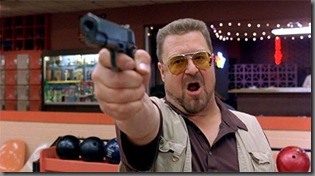 mance.  His Walter is the most memorable thing about The Big Lebowski. Extremely gifted when it comes to voice inflection, body language, and most definitely facial expressions, Goodman turns what otherwise would have been an irritating idiotic sidekick into an exasperating psychopathic wingman. Whether he is jumping out of a moving car or interrogating a teenage boy, or most memorably throwing a paralyzed man to the ground, Walter is outrageously believable.  For me, if there is one reason to watch The Big Lebowski it is Goodman—he is most assuredly not an amateur.

Overall, this is a typical Coen Brothers’ comedy: uniquely written and strongly acted. Other than a few standout performances and an unusual plot there is nothing that makes me want to watch The Big Lebowski over and over again.