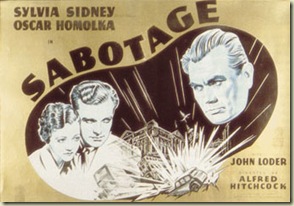 I recently wrote a review of The 39 Steps and based on the comments it elicited I came to the conclusion that Hitchcock’s pre-Hollywood films are often overlooked or even forgotten.  I’m sure there are many reasons for this, but I think many of his early British films should be watched to understand how his directorial vision developed.  You don’t just wake up one day and direct Notorious or Rear Window. As such, I think Hitchcock’s earlier films provide excellent examples of how he honed his style over a period of many years. Sabotage (1936) is one of those forgotten gems that one should watch to gain more insight into the Hitchcockian vision.

Based on the novel The Secret Agent by Joseph Conrad, Sabotage is a suspenseful thriller about an international terrorist group (or saboteurs) who hold London in a state of anxiety through their 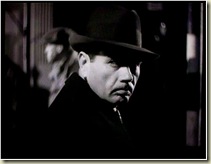 rampant bombings across the city. Though not designated as Nazis by Hitchcock, many film historians believe that is exactly who the saboteurs were meant to represent. This makes sense, as Germany and Italy had just signed the Rome-Berlin Axis and many Western European nations were growing alarmed by Germany’s growing militarism. There were even rumors that German spies were attempting to infiltrate Britain and create public unrest.  As such, the film’s saboteurs serve both an artistic and political purpose for Hitchcock.

The film opens metaphorically with a close-up shot of a flashing light bulb (a warning signal?) and then transitions into a shot of a crowded London street right before a blackout.  In true Hitchcockian fashion, the film cuts back to the flashing 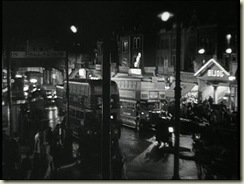 light bulb and we watch as the light slows its pace and then goes completely out upon the blackout. Another quick cut takes us to the Bijou,a movie theatre run by Karl Verloc (Oskar Homolka). Dressed in the typical accoutrement of a shady figure—a dark overcoat—Verloc seems to be sneaking back into his home just after the blackout hits. When he lays down on the couch and covers his face with a newspaper you instantly know something just isn’t kosher. When his wife (Sylvia Sidney) comes to complain that the theatre’s patrons want their money back he tells her to give it to them, hinting that they don’t have to worry about money any more.  Why?

Soon we are introduced to Mrs. Verloc’s little brother Stevie (Desmond Tester). Stevie encompasses all that is innocent and good, which is reinforced by his helpfulness and trusting nature. Through 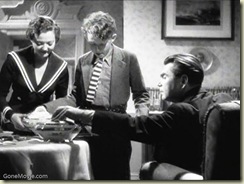 Stevie we meet Mr. Spencer (John Loder), the street grocer…well, actually he’s not really a grocer but an undercover Scotland Yard detective who suspects Mr. Verloc is involved with the saboteur group. Spencer and Verloc engage one another in the typical Hitchcockian game of cat and mouse. Verloc comes off as cool and detached whenever Spencer makes suggestive comments about the bombings taking place in London.

It is really enjoying to watch these two actors play off one another, especially when you throw in Sylvia Sidney as the unassuming wife. In addition, Verloc is the traditional quiet and unassuming Hitchcockian villain. He doesn’t seem particularly menacing (at least until the end of the film) and seems like an inconspicuous 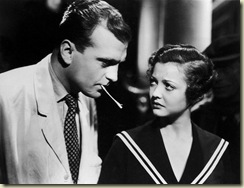 personality. In addition, like in so many Hitchcock films, the line between villain and hero becomes blurred when Spencer begins to have feeling for Mrs. Verloc and even when Mrs. Verloc reaps her revenge at the end of the film.  Hitchcock had a habit of blurring this line, in such films as Marnie, Notorious, and some would say even Psycho. It is also interesting to note that John Loder was not Hitchcock’s first choice for the role of Spencer. Instead, he hoped to work once again with his The 39 Steps leading man, Robert Donat, but the actor was being treated for severe asthma at the time.

The puzzle pieces start to take shape when Verloc and an accomplice meet at an aquarium and discuss the city’s reaction to the recent bombing. A newspaper headline reads: “London Laughs at Blackout”. 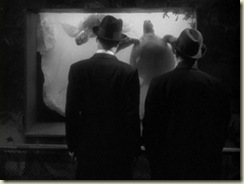 Evidently no one was hurt in the blast and this means Verloc isn’t getting paid.  He’s told he must deliver a bomb that will do substantial damage before he gets his money.  In a rather creative shot (at least for 1936), we see Verloc staring into a fish tank as he imagines as a collapsing building in Piccadilly.  This scene is especially effective, as Hitchcock uses shadows to evoke a sense of sinister unease.

Eventually a plan is put into action to detonate a time bomb at 1:45 on a Saturday afternoon. A note reads: “London must not laugh on Saturday”—yes, the opposite reaction is, of course, the outcome. In a strange twist (but not strange for Hitchcock), Verloc gets Stevie to deliver the bomb, which is disguised in a film reel/roll of Bartholomew the Strangler (a nudge toward the St. Bartholomew’s Day Massacre of 1572?). Ah, but you never send a child to do a man’s work, now do you? Instead of promptly 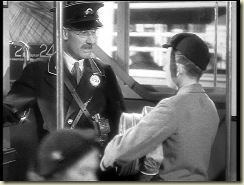 delivering the “package” Stevie attends a a street show and a parade and finds himself tardily boarding a bus for his destination. The bus, and everyone on it including Stevie, goes kaboom.  It is said that this was one of Hitchcock's’ greatest film regrets—he had violated his own rule of never harming a character with whom his audience had come to sympathize.  In the end, we are privy to the unraveling of Mrs. Verloc and the eventual comeuppance of Mr. Verloc.

The film is tension filled, especially little Stevie’s errand from hell and the showdown between husband and wife. The bomb delivery sequence is nearly 10 minutes long and is taut with suspense. The showdown between the Verlocs is rife with unspoken anxiety and edited with shots of uneasy close-ups. In addition, Hitchcock uses 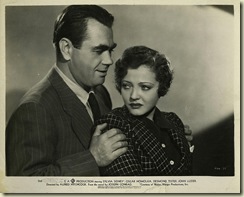 the theatre setting as a clever device to mix reality with fiction, as in the scene where Spencer is visiting the Verloc’s and he hears screams and shots ring out.  After recovering from being startled, he comments, “I thought someone was being murdered.” And, then with a wonderful comeback, Verloc responds, “Someone probably is.” Priceless, and filled with so many undertones!

Sabotage is perhaps one of Hitchcock’s darkest films—what with killing an innocent child. It is also one of his few films that doesn’t contain a true mystery. Shortly after the film starts everyone knows who the bomber is and there is nothing to truly unravel. Instead, it is purely a suspense film.  As such, it is a rather unique Hitchcock vehicle.