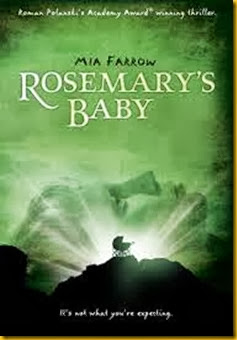 What’s worse: delivering Satan’s son or having divorce papers delivered to you in front of the entire cast and crew on a movie set?  Such was life for Mia Farrow during the filming of Rosemary’s Baby (1968).  Director/writer Roman Polanski’s taut horror tale is widely considered one of the best horror films ever made.  For me, it’s mildly creepy, but not really that scary.

Rosemary (Farrow) and Guy Woodhouse (John Cassavetes) are a young married couple who make a fateful decision when they opt to lease an apartment at the Bramford in New York City.  The mammoth building has a bad reputation as a hotbed for witches and other unpleasant 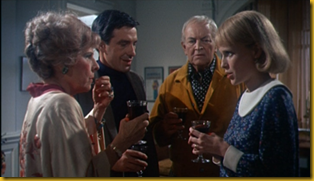 types. Guy makes quick friends with their senior citizen neighbors Minnie (Ruth Gordon) and Roman Castevet (Sidney Blackmer), but Rosemary finds them crass and nosy.  Their overbearing nature takes new hold when Rosemary discovers she’s pregnant. Minnie plies her with a tannis root concoction of a drink and insists Rosemary change her OBYGN to a friend of theirs, Dr. Abraham Sapirstein (Ralph Bellamy).  The pregnancy is wrought with unpleasant stomach pains and a dramatic weight and color loss for Rosemary—not to mention cravings for raw meat. Realizing that something is obviously not right, Rosemary starts to envision some sort of nefarious plot is afoot when it comes to her unborn child.  She was right.

Other than the fact that she becomes impregnated by Satan, the plot is quite plausible.  Polanski had a habit of making ordinary things like domesticity and friendship vulnerable to human baseness and ulterior motives.  Who could suspect the friendly, elderly couple next door are Satanists who would drug you so that Satan could rape and impregnate you?  And, who would ever imagine that their husband would go along with such a scheme to ensure that his acting career took off?  Now, the end of the film is way too much of a stretch for me—I just don’t envision any woman changing her mind about raising the child of Satan—not even the most Catholic woman on the planet.

Polanski earned an Oscar nomination for his adapted screenplay of Ira Levin’s hugely popular 1967 novel of the same name. I suppose Polanski wondered why mess with a good thing, so the script was very faithful to the book and those who read the book surely recognized huge sections of dialogue taken directly from the novel. 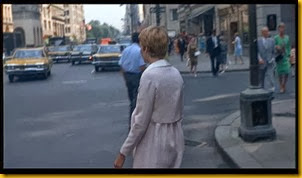 While Farrow was far from Polanski’s first choice for the role of Rosemary, he ended up being very pleased that he had an actress so amenable to some of the crazy things he asked her to do.  In particular, there’s a scene in the film where Rosemary wanders into New York traffic—a scene that was shot by Polanski using a handheld camera—which was not cleared with the city of New York. That’s right, it wasn’t a blocked, staged scene—it was freaking real!  Did Farrow have a death wish following the delivery of divorce papers?  Yes, it is up to you, New York, New York, indeed!

While I’m not a big fan of Farrow, she does a nice job of playing a mouse-like waif who is almost too willingly led down a path paved in not-so-good intentions.  It’s hard to feel sorry for someone that stupid, though.  Her complete opposite is Ruth Gordon as Minnie.  Even when her character is 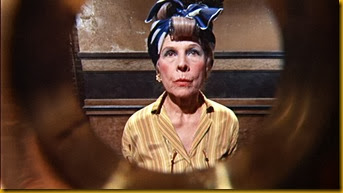 doing very bad things she comes off as the helpful crazy lady next door.  Gordon won a Best Supporting Oscar for her turn as Minnie, and she deserved it.  The voice, hair, clothes, and mannerisms were perfect for the role. While Minnie didn’t come off as evil incarnate, her husband Roman did.  Rosemary’s Baby was Blackmer’s final film, and he went out as one of the best minions of Satan ever.  Perhaps it was his eyes, but he looked the part.

So, did Rosemary’s Baby live up to its storied reputation as one of the best horror films ever?  I guess it matters who you ask.  For me, when I watch a horror film I want to be scared.  At no point during the movie’s 136 minute run was I frightened.  Films such as The Exorcist (1973), Candyman (1992), and The Omen (1976) are far more scary than Rosemary’s Baby. I don’t know if this is because most of the horror is implied or not, but, for me at least, Rosemary’s Baby was more a study of elongated dread with not much payoff in the end.