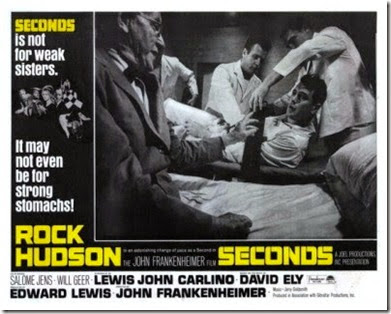 Based on David Ely’s 1963 novel of the same name, Seconds (1966) is a disturbing science fiction—and, I would go as far as to say horror—film about a man who completely takes on a new identity to escape his meaningless suburban lifestyle.  Director John Frankenheimer, along with cinematographer James Wong Howe, depicts a stark vision of a world where lives can be created or taken by an underground company headed by a man who looks and sounds a lot like Harry S. Truman (Will Geer).  The story itself is so bizarre that it is frightening, and Howe’s voyeuristic cinematography and Jerry Goldsmith’s 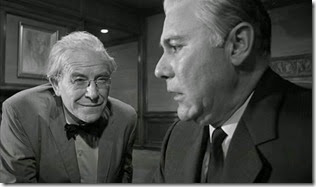 On his nightly commute from his New York banking job to his suburban home in Scarsdale, Arthur Hamilton (John Randolph) is given a scrap of paper with an address written on it. Later that evening he receives a phone call from a man claiming to be his dead best friend, Charlie (Murray Hamilton), who attempts to convince him to change his life.  What happens next is a series of shockingly matter-of-fact conversations between Arthur and the “Company”.  It seems that they can help him extricate himself from his empty existence, in which he no longer shares intimacy with his wife (Frances Reid), sees his married daughter, or enjoys his job.  All he has to do is set up a trust worth $30,000 to handle his transition—a cadaver must be procured for his “death”; extensive plastic surgery must be performed; and, his new identity must be established. Trust signed, Arthur goes under the knife and several weeks later Tony Wilson (Rock Hudson) emerges.  He chooses artist as his new career, and the company sets him up in a beach house in Malibu and assigns John (Wesley Addy) as his adjustment advisor (and servant).  When it appears that Tony isn’t transitioning as they would like, they send in a woman (Salome Jens) to help the process along, as well as some other “reborns” to monitor his behavior. Unfortunately, Wilson doesn’t adapt to his new life and returns to New York to see where he went wrong with his wife and to ask the Company for a redo, so to speak.  Without giving the ending of the movie away, I will say that the last five minutes of the story are startling and uneasy to watch. 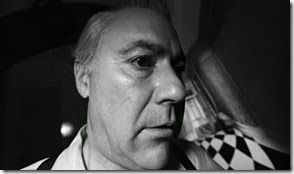 There’s something about black and white film that makes psychologically disturbing movies even more frightening.  Howe’s cinematography creates a cold, austere atmosphere for Seconds, which expertly matches the disturbingly detached narrative.  Cinematically, the most important theme created by Howe and Frankenheimer is the distortion of reality. Their use of a fisheye lens to capture Arthur/Wilson’s distorted sense of being creates a mode of expression that a standard lens could not achieve. Additionally, the use of extreme close ups (so close you can see the character’s pores) elevate the tension/anxiety level and are almost jarringly uncomfortable to look at.  In one particular scene, after Arthur has spoken on the telephone to Charlie, Arthur is framed in a tight close up shot which depicts his unease and unhappiness. This shot is then followed, in rapid succession, by a 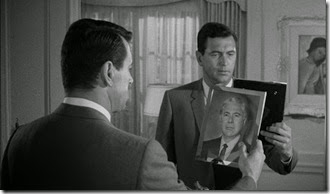 medium and then a long shot, which emphasize Arthur’s isolation. Another scene that I especially enjoyed was when Wilson returns home and picks up a picture of Arthur, while standing in front of a mirror, and his face is reflected across the glass of the picture frame and the two faces of the same man are captured.

Of course, such disturbing images deserved to be set to an equally disturbing soundtrack. While it has a sound all its own, Jerry Goldsmith’s soundtrack seems to pay homage to Bach’s Baroque style. Filled with imposing organs, melodic strings, and eerie 60s electronic music, the soundtrack is just as disquieting as the film’s subject matter. 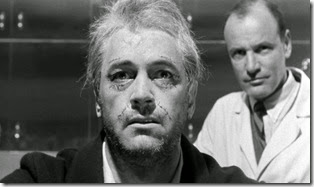 Seconds did not do well at the box office or with critics.  Some found the idea ridiculous that John Randolph’s Arthur could be transformed into Rock Hudson’s Wilson. This is a valid complaint, as Hudson was nearly a half foot taller than Randolph and ten years younger, too.  Moreover, audiences weren’t quite prepared to watch Hudson in such a dark film—especially not after seeing him in a string of light romantic comedies.  Personally, I was equally impressed by Hudson and Randolph’s performances. Randolph expresses his character’s disillusionment and resignation quite effectively—so much so that you actually do feel sorry for him.  And, Hudson, for his part, is quite memorable in the last few scenes of the film, where he displays a gamut of emotions: regret, hostility, and horror.

Overall, while I must admit that the story is a bit far-fetched, it is also so disturbing that I couldn’t help but be drawn into it.  It also helps that it was expertly filmed and that the soundtrack only enhanced the terror of the narrative.